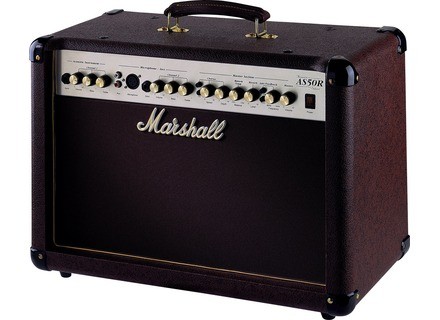 AS50R, Acoustic-Electric Guitar Amplifier from Marshall in the AS series.

View other reviews for this product:
Transistor amplifier, 50W.
I bought it mainly for a small amp versatile enough for both my electro-acoustic when it is only slightly increase the volume of a microphone.
2 channels: one that comes in jack, and one that comes into jack + XLR + RCA simultanment.
At the rear, an effects loop, line input and XLR DI.
The effects are pretty average bill, only one foul and one rberb quite correct for a scratch chorus Scheer.

I put a note to the rich side connector

Manuel is no longer more succinct, and can no longer necessary. I'm not a guitarist, but in 10 seconds, I found a sound that suited me.
The rverb does not give a frank impression of naturalness, the chorus is a bit more crdible.
The sound is fairly typical Marshall, not too neutral, but we feel that there is no heat lamps.
Power level, the cash good. I used sometimes in return, and ca is more than enough for use at home, in RPET. For the live, it must be really just for cons, but we have the DI to go to the console!

Main use with a small Takamine electro-acoustic, but with a Lag Roxane up in EMG, and it sounds a lot even when.
I also used a 5-string bass (not good to have, I know), and not push the watts, it sounds not too bad, even if we feel that it is not prvu for.
The sound is generally correct, rather chilly, but one might expect since it's a whole transistor.
For the price, That sounds really pretty, if you want to do the big mtal that stain!

I use it now for six months, and I like it this little amp.
I like having a "mini sound system" with a lot of, it allows to avoid the time to leave the big stuff fMeasure compared the usefulness .. .
In fact, I had a crush on this amp, seeing a friend play it (with an electric yet), I have not tried others before buying.
Ngatifs points are undoubtedly the effects, not really the super rverb!
A bit expensive, but we still the same reputable Marshall, if you want to think about resale. Ah, a dtail, the amp is dark brown but not too bad when even!

I think I buy the same if I had the usefulness of two!
See the source
Did you find this review helpful?yesno
Cookies help us improve performance, enhance user experience and deliver our services. By using our services, you agree to our use of cookies. Find out more.