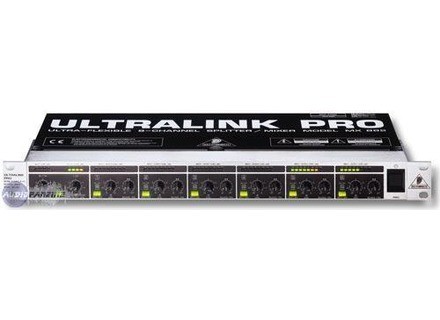 Behringer Ultralink Pro MX882
4
The Behringer Ultralink Pro MX882 is an eight channel mixer and splitter that can be used both in the recording studio and on the stage. My experience with the Ultralink Pro MX882 is in the studio only however. You can use this in two different ways - either as eight channels of inputs and two outputs, or two channels of inputs and eight outputs to split your signal. The unit has two main XLR inputs and two main XLR outputs, as well as both an XLR input and output for each of the four channels. The last two channels have 1/4" connections for both inputs and outputs. It can be powered with a standard power cord and will take up only a single space in a traditional rack case.

The general make up of the Behringer Ultralink Pro MX882 is a very simple one to follow. Once you know what types of connections you'd like to make, there isn't too much left to do. Each of the six channels beyond that main two have parameters for input and output levels as well as a button for choosing between either spitting or mixing. The MX882 also has parameters for your main input and output levels as well as a main link button to choose either in or out. Each channel also has an LED meter for monitoring your levels. A manual probably isn't necessary for most users, but if you feel like you might not be able to understand it all off the bat I'd recommend having it around just in case.

The Behringer Ultralink Pro MX882 doesn't make any sound of it's own, but you can judge it on how well it translates your signals. While it is hard to tell if there is any quality loss, since it is a pretty simple splitter/mixer, I would bet that it would be very minimal if any. If you're doing simple jobs with it to I can't imagine that you'd be getting any noise or anything like that as long as everything is connected properly.

For the price of the Behringer Ultralink Pro MX882, you really can't do too much complaining. It will definitely get the job done in more instances than not. Although I'm always weary of a Behringer product, I feel like this is the type of gear that you don't need to be spending too much money on, unless of course you're using it all the time. The only real downfall of the Behringer Ultralink Pro MX882 is that it feel cheap, but as long as it does the job, at this price I don't have have any qualms.

Very good product. I had two, and never disappointed.

The only negative in my opinion are notched knobs, there may be a slight difference in the level of the canals. But it is not dramatic.

vetjc's review (This content has been automatically translated from French)

The manual (as all the manuals Berhinger I know is simple and succinct, but contains everything you need
The functions are clear if we know a little about routing a mixing classic

The sound is good: OK transparency and no breath (symtrie)

I use it for 6 months (I have two)
I use it mainly by its function splitter / patch that allows me to vary the volume of a stock returns to a small group and for the various machines ddies recording ...

A super complment a good mixer with routing is a little brid ...

wallyman's review (This content has been automatically translated from French)

Behringer Ultralink Pro MX882
5
Ele is in 1U rackmount.
There XLR everywhere except for lanes 5 and 6 are Jack.

It's very simple, except perhaps the first to be sure of what we do.

She has a little breath I utlise necessarily in tundish amp, suddenly it amplified a little bit but the breath of upstream elements, but nothing unusual in fact.

I depui 5 years.
What I like most is it's robustness and its price, and the less it can be registered.
Very good value for money, I use it in tundish amp and it works very well at that price I connai no other personally.