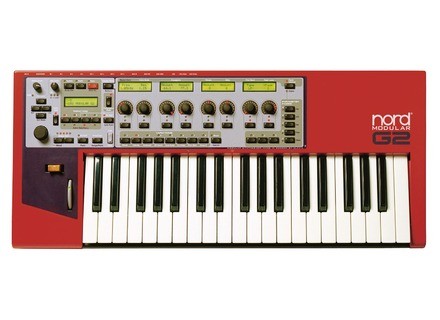 Clavia Nord Modular G2
5
The Clavia Nord Modular G2 is a small synth that specializes in all sorts of modular synth sounds.  It has a ton of parameters and options and is quite versatile in what it is able to do.  The interface of the keyboard isn't hard to follow, but there is a lot that it can do so it will probably take you some time to get accustomed to everything that this synth has to offer.  It is a polyphonic keyboard, but most of the sounds are in monophonic form, which can be changed depending on the patch.  The keyboard is rather small in size as it ranges just about three octaves.  The synth as 1/4 inch connections for basic things like inputs and outputs as well as for a sustain pedal and also has connections for MIDI.

The configuration of the Clavia Nord Modular G2 synth is pretty user friendly, but more toward those who have experience with synth.  In other words, this isn't a beginner's synth and is more catered toward those with a bit of experience.  Either way, if you play around with the G2 enough, I don't think you'll have a hard time figuring out what everything does.  The manual is probably a good thing to have around if you are unfamiliar with synths and the terminology that comes along with them.

The sounds possible with the Clavia Nord Modular G2 are pretty great overall.  You can definitely get yourself all sorts of synth sounds, no matter if you are looking for a good lead or bass sound.  This pretty much has it all when it comes to synth sounds and is definitely has the parameters and effects to go along with it, making the amount of sounds possible incredibly versatile.  If you are looking for modular synth type sounds in variation and control, the Clavia Nord Modular G2 definitely provides that.

Overall, I think that the Clavia Nord Modular G2 is a great little synth.  I love synths that are small and easily portable and I don't really think for sounds like this that you even need more than three octaves - at least I know that I don't.  The price is definitely reasonable and to me this is the perfect synth to bring to shows as a supplement to another keyboard that has more traditional keyboard sounds like pianos, organs, etc.  All in all, this is a great synth from one of the best modern synth makers.

pyexperience's review (This content has been automatically translated from French)

I is not yet studied the manual and I do not come out too bad.
Editing sounds is easy and well thought out, it is possible to edit without screens each module has one, to set the morphing quickly and live.

It is digital, a small built even very basic sampler would have been perfect.
I made a patch based on the korg 770 I've owned, in comparison it's still not bad.

The peculiarity of this synth is that it is in this concept a little unique, the price would be much less with similar models later.

1 of 12 people found this review helpful

Clavia Nord Modular G2
5
Repeatedly announced and postponed, the Nord Modular G2 is the synth that I have never expected much ...
Well, I must say it is well worth the wait.
The physical aspect of the machine embraces the main features of his colleagues:

Front: We see immediately Clavia's will to live of modular use nothing but the wheel for morphing, pitch stick, which were not on the previous version.
5 screens are present smaller than a Nord Modular, etc. Everything was done to the vehicle used in standalone and with success.

It should be noted that the screens appear to be quite fragile and continues to set the Clavia rortary dial (the big button) in the frame that caused me a lot of worries on the G1.

The rear panel:
4 line inputs + a pre-entry emplifiée (female XLR) which is a huge advantage over other products developed by Clavia, 4 outputs. And USB output for the publisher. And MIDI (out, in, through)

Let's go into the machine:
Already a disappointment: the polyphony yet to see 32 and multitimbrilité which is only 4.
But the memory has been greatly improved (to say the least) for a better allocation of resources, the patches are separated into two: one part is devoted to publishing (oscillator, filter ect ...) even if they have little to include the effects, and some effects, because the effects (delay, reverb ...) are new to the north and are modular in large part responsible for the sound of the machine.
Disappointment for Maciste: no editor for Mac. (I can not enter the development at Clavia)
In general, editing is more intuitive bcp as the publisher on the front of the modular

It configures the patches from the keyboard alone, with ease!
The five screens display parameters stored by category (oscillators, LFOs, effects ...) and columns per page, allowing to quickly view the saved settings.
Eg a sequencer recorded on the front is controllable through LEDs and visible along the entire length of the sequence, and we act on it much like a BAR.
As for the numbers of pottards (restricted to a VA), they are widely enough because of the variety of assignments in which they can be. In addition, it is the same as those of the Nord Lead 3 even though it does not display the values ​​in green zeros :-(

As for the publisher of the modules mentioned on the previous generation have been removed (eg in the case of forming bone) but many others will come and fill this gap. D also the number of new modules or modules improvements should calm the ardor of some. It is clear that efforts have been made on the presentation of modules (colors, came out square and round, the outputs that change color depending on whether the patch an audio signal or control signal) which allows a more intuitive than ever to the editor.
A big big advantage is communication between the slots (the patch recorded and used directly) and yes, you can use all the resources of a slot for the effects and apply them to other slots, which was not possible before ...

Sounds, how I could say ...
it is a slap in the face, my brain literally squirted on the walls.
Sounds can be rough as those of North Nordlead 2 or modular or depth that I did not expect.
They can be thin and may change constantly.
The bass that were lacking in G1 are insane (big, fat, deep, aggressive, hot) ...
In short my words are merely euphemisms, go listen.

I had a virus C, a Nord Modular G1, a Nord Lead 3, and its level: none of them comes close
The instrument itself is more intuitive and bcp not necessarily require extensive knowledge in audio (if the bases are required as well), especially since the patches can be pre-recorded new sounds based on if not want to take the lead (because each patch can be regarded as a synth in its own right).
Another highlight is the free use computer that will take her to live without any problems ...
Only big disappointment: polyphony and multitimbrilité that limit but given the sound, we forgive him.
Go, shoo! 10

Clavia Nord Modular G2
5
Hello I went to listen this wonder this after noon.
For the features I can not because I have been able to note the esseyer 2 hours so ...

Easy enough, but I did not found any.
So I not notice, sorry

Ooaahh !!!!!!!!!!
Super slap it really!
Superb, sorry I have no words to describe.
Many sounds for the dance.
for me it's the best of all I could esseyer.

I do not notice because I only had two hours, but I think it is really good!

Did you find this review helpful?yesno
»
Read the 6 user reviews on the Clavia Nord Modular G2 »

View the 7 files about the Clavia Nord Modular G2 »