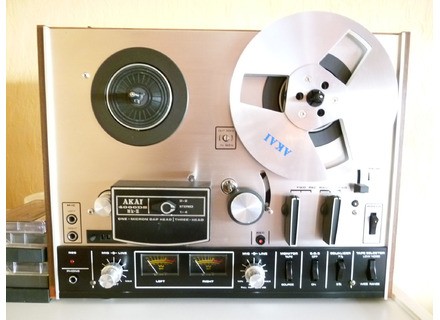 I bought this a year ago magneto just to save our repeated as it freehand. I wanted to start a Revox but given the price this one in working order, I quickly gave up and I'm falling on it while working order. Without instructions, I was quickly disappointed at the group registration for the 18cm band ended too quickly and I did not find how to reduce speed and so I sulk for several months until I ... have brancer on my hi-fi and find a job nmode. I recorded some vyniles after finally figuring out how to reduce the speed and the result?? WOW!! a super clear sound and heat breathtaking. In the end when in the manual and you understand how it works, it saves a lot about a band 18cm thanks to its 4 tracks. Well it is not a 4 independent tracks (that's why not interesting por group) but a 2X2 tracks with ability to record in mono which allows recording once in one direction and once in the other stereo Register even in total on each track. Given the amazing sound quality, I decided to open it is to make a thorough cleaning: simple Mechanics and material quality to blush Revox!
In the series of 4000 there is the 4000, the 4000D, the 4000DS 4000DS MK2 and it is always the same but with little more detail but it is always the same indestructible mechanical.
Defects? Well, if you compare to other electronic magnetos, the controls are harder lever a push button, no auto-reverse but hey .... we obviously not easy to an MP3 player but cons: WHAT HER!
Encouraged by this discovery, I have tried other magnetos more recent bands (more electronics also) as Technics, Pioneer, Grundig, Teac and even A77, I have not found an equivalent and certainly not the same reliability.
I bought € 100 but we found between 50 and 150 € according to the state which is really not expensive for the quality of sound is the material it is and it's still me expensive secondhand other more reputable and worse. If you have the opportunity to find one do not hesitate to take the plunge as it is still in this price range there
See the source
Did you find this review helpful?yesno
Cookies help us improve performance, enhance user experience and deliver our services. By using our services, you agree to our use of cookies. Find out more.