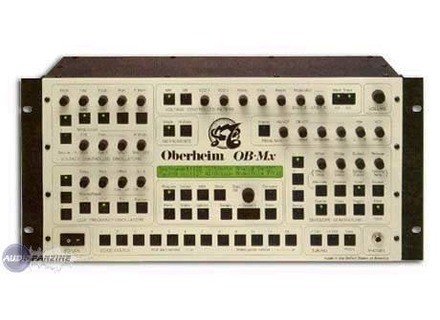 Connectors
Audio: Main Out (x2), 12 mono outputs
MIDI: In, Through, Out
headphone
Power In Hands

Don Buchla involved the design found the logic a button / function (32 pots and 47 buttons!) Making it an enjoyable program synth. Inasmuch as the same era there were only a JD 800 Roland.
Nanmoins the buttons are not notched, no guts to feel neutral .... Premire version and have not even caught himself in white net.

When we entered the market yet the era tions of "numrique". The return of the analog s'amorait sentence. There was still the Matrix 1000 and SE-1 that could belong prtendrent the Analog Class. In this context the OB-MX silent a kind of UFO.
Are taken elsewhere to be silent something / The base rack with only two voices stood at CHF 22 500, expansion card 2 Voices silent pice of 7000 Frs, which makes us Full Voice ... 12 57 000 francs! New analos today like Voyager and Andromeda are not ashamed of their prices.

It is noted that the machine is rput for its lack of reliability and its many bugs. If you want to buy one make sure to purchase the OS2. It is recognizable because the buttons have a white net to recognize their position. And ignition of the No OS is indicated on the screen. OS Version 1 is too unreliable and trs buggy.

Overall the machine is interesting, sounds good, 6 Voices are less defined Necessary for making the most of what we can do.

In the context of 2006, the market volumes and I do not know if this type of machine is still interesting anyway (my opinion). Version 2 Voice sells for around 650. It gives me silent prfiguration of what Andromeda today.
... But it's a synth that has the boot and which can still fall in love

bluewave's review (This content has been automatically translated from French)

Oberheim OB-Mx
5
The previous review is quite comprehensive. Let me just correct some inaccuracies.

This is not a but a 5U 6U! I just checked. The black squares (not necessarily very fun) withdrew without any problems.

The buttons are not serrated, but personally I prefer (it makes less noise when one turns them

: one is analog and I can not see myself having a few notches to fix the settings! Moreover, everything is displayed progressively on the screen ... The white net "to identify" apparently is not a question of versions ... I know who have or are not "famous" nets and there is nothing to the "date" in relation to this aspect of the matter ... Small difference also visible: some are as smooth as the SEM modules, others are very slightly "granites". Let's hope it does not change the sound

It is true that Don Buchla to participate: it is even written in black and white on the machine! YES then the sound is there. It's TRUE analog ... What else? Version 2.0 of the OS on the Master board EPROM is generally agreed more stable ... But what about the update of the Voice of EPROM cards or functionalities? And where to find the factory sounds or other?

This blog is a small contribution for all those seeking the "famous" EPROM ... You'll find the Master in version 2, Voices updates, EPROM calibration, etc. ...

Given the rate at the time, the beast is rare ... Nowadays, the rating seems a bit low. It's always the same problem: the initial price, demand and supply. Still, it is a truly remarkable machine and a set-up that makes him serious! A lot of versions 2 votes are "available" but to be more under the hood, he will have to seek and accept "compare" with offers of other similar machines Oberheim (OB-X, OB-Xa OB-8, Xpander, Matrix-12, 1000) ...

See all 27 photos of Oberheim OB-Mx »

View all 2 videos of Oberheim OB-Mx »

Oberheim OB-Mx manuals and other files