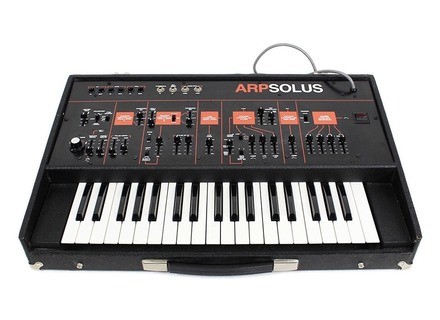 skunx's review (This content has been automatically translated from French)" excellent"

ARP Solus
see above for features

a little patience to understand how the beast will roar, but the screen looks like the 2600 or arp odyssey, just follow the arrows dde

cons by quite complicated to grant the oscilloscope (only negative)

of 24 db (real) need I say more, that you exploded the speakers, it works great in cv / gate thanks to Telemark, and cubase driven hop is hell.

the water swept over the super low to the odyssey (a mistake) I have nothing to repprocher except that some things in the odyssey are not good but it is odyssey not either!

for a week and I'll keep this one on it, notice to those who make the EBM, the sound of DAF you with the solus!!

daniel herman's review (This content has been automatically translated from French)

Synthtiseur this apparently simple is not necessarily accessible using scnique.
ARP has also badly placed on its configuration, using as the Odyssey and 2600, the
potentiomtres linear (sliders) and much less prcis also less efficient than rotary potentiomtres (buttons), but what distinguishes its Aesthetics.
The other mistake is placing the volume (VCA) other than logic (extrmit the control panel).
This synthtiseur Nevertheless a small MODEL lightweight, efficient and friendly, and you can find
its behalf by the power and effectiveness of the filter 24 db and the ring modulator, rare on other devices in this range.

The sounds vary halfway between the Minimoog and the Odyssey, but its price much lower lev has to be classified as a good quality report. (1000) approx.
Clever, it prvu silent output gate CV (ancestor of the MIDI interface) and by allowing the trigger via a CONTRL squenceur or other models of the brand.
Dj a beautiful little research lab, not an ARP 2600 either, but a good introduction Contents ARP in the family.

I use what I synthtiseur possde for over 15 years primarily intended for use squentielle.
He found a new lease of life after the addition of a MIDI interface.
I would not look me his spare and seventies black and orange swears absolutely in my home studio, a nice little synth sounds clean and both acids.
Finally last inconvnient the height of the stamps (in too high) but not at low (32 'for example).

See all 8 photos of ARP Solus »

ARP Solus manuals and other files