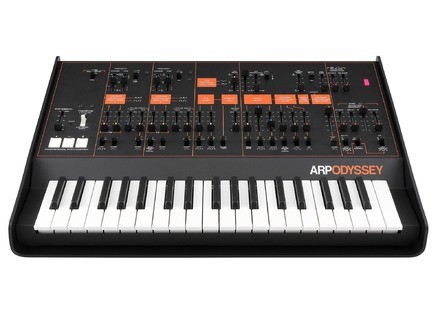 Studioliv's review"Great job! What a sound: pleasant, lively, fat or not, nice sound grain –but a small keyboard though"

Well, in any case for that kind of music: https://soundcloud.com/studioliv/sets/my-own-tracks

So, it’s used in a home studio alongside a Minilogue and a Slim Patty among other analog devices. I put a Strymon Bluesky right after.

It’s a well-finished product, faders are firm to taste, imo they are to be handled not too fast to keep this resistance on their course. I’ll see how it ages.
Couldn’t be better ergonomically, but that seems quite normal on such a synth that seems to come from another time period. Each fader has its own purpose. The keyboard seems sturdy, though quite kitschy. I think it’s normal to have that sort of feeling with a small keyboard – I have the exact same feeling with the Minilogue. By the way, their touches are quite comparable. If I can, I prefer to play the Odyssey with a separate master keyboard through MIDI.

I was after a sound close to this. I long hesitated before finally getting it. It has no memory bank, can be used as mono or duophonic – I’d even say triphonic depending on the sound – and, most important, its general tuning is not easy to get used to when you mostly work on digital keyboards (just like me until then...).

I first tried the Slim Phatty... A big, nice sound, but not enough vintage-sounding for me – not enough “instability” if I may say. I was after lead sounds comparing to the CS80’s or the Yamaha C1 or C2’s. I tried the Minilogue... Not bad, some sounds react differently when playing legato.
I’ve also tried – and sent back – the Deepmind 12, instead of which I took an Arp Odyssey. Now, the sound is getting close to what I wanted: a lively sound, full of motion that provides grinding bass sounds, no chorus needed and the detune effects really do the job. You really get yesterday’s sound with a certain kind of instability in the sound – which gives it all its charm. Sometimes, when you play, you feel like the “articulations” (a digital age comparison

) start to work between two notes. So you got it, I really had a crush on that one. This video convinced me to get the Arp:


A very simple, “normal” version of this synth – that’s the philosophy behind this model. Making sounds… you just need to get used to the way the knobs and faders react. But it goes quickly, as you have everything under your eyes.

As usual with analog synths, it takes at least an additional reverb or delay, except for basses and some specific sounds. A real change compared with the digital models, really...

Now let’s start with the cons...
I don’t really know, except for the keyboard’s size. Now, there’s a “Full Size FS” version which is twice as expensive than this 2/3 version and delivers the exact same sound. There’s so little in this synth I can find fault with, that I might end up telling you about the problems I found with its bigger brother.

I’ve been surprised by the absence of a MIDI Output. To me, it’s strange to have a synth without it... but in the end, I perfectly understand its lack of necessity on such a model - and, you can still get a MIDI Out when plugging in USB.

Everything – it finally matches the vintage sound that i was after.


Now, i’m starting to consider turning against my Minilogue, which I may swap for a Pioneer Toraiz AS-1 one of these days... On the vintage side, this one looks nice, too. But that’s a different story…

I’d sure make the same choice again, and i’m sure to keep it for a good while.
Did you find this review helpful?yesno
»