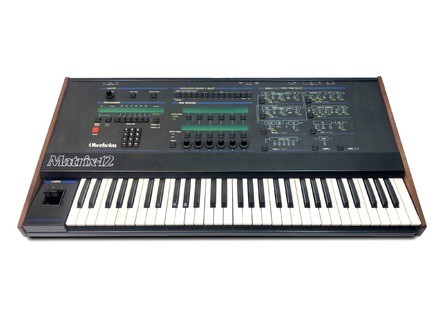 ostrovitch's review (This content has been automatically translated from French)

Oberheim Matrix 12
5
5 octave keyboard for latest issue with aftertouch.
2 oscillators with which one can shuffled several waveforms (interesting).
polyphony, as its name indicates it is 12.
In fact it is a 2 Oberheim Xpander cascade + keyboard, except that not all
12 matrix has 12 audio outputs as spares Xpander (which has 6).
But it is an option that can be added.
Multimode filter 15! positions.
4 types of filter LP / BP / HP / Phase Filter, which can be dcliner
by 12/18/24, and can arrange in SERIES.
One of its kind 1LP12db BP etc ..., a total of 15 combinations.
100 patches 100 performances, everything in RAM.
The VCO is analog, but numriquement commands.
Modulation matrix consquente really, especially for the era
o it was released, a c'tait vritable rvolution.
It is a multitimbral infinite fawns.

This is not a simple synth.
But it's not a problem, it is to be found sr new
sounds every day, so the possibilities are standard.
The only thing I is not too AIM knobs and notched noise.
As against this endless buttons, it's a.

No effects, but given the sound aa, we will accept external effects,
or no effect at all because it's the real Oberheim. Can be a little more
The series purpose of OB, but the sound is more than gnial.

It is a machine rve, simply a synth mythical possder Emergency
for those who enjoy this type of sound. It is difficult to find trs, trs, or at least cheap
euros in 2500/3000. I had mine in 1500 Euros with a voice that dfectueuse
I hasten to rpar.
This synth is low on circuits curtis pretty hard to find, including CEM3374 (VCO)
who became totally not found on this plant.
Another particularity it takes a lifetime to Entire discovering all its possibilities,
I have only been two months, I have work to do.

19 of 21 people found this review helpful

Listen to the 20 audio files about Oberheim Matrix 12 »

Oberheim Matrix 12 manuals and other files