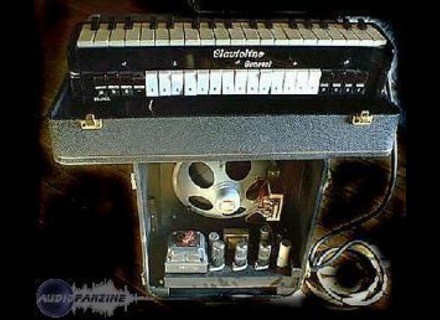 Brother_m's review (This content has been automatically translated from French)

) invented the Clavioline, a monophonic portable (but not too long otherwise you tired ...), low tone generator the octave transposition: from a single oscillator results in a potential five octaves. MODEL The original is marketed by Selmer in 1954 France and resumed later around the world by licensing (England, United ... the Gibson model ..).
The instrument consists of two bags: one containing lamps (tubes), the amplifier and the speaker and generates the sounds, the other contains the keyboard (one octave and a half) of wood and ivory keys with the 22 control pushbuttons (bakelite) to control the tone (low filter high pass and low), choice of the octave and the attack, plus two controls for speed and intensity of vibrato. The overall volume can be controlled by a level has zippers under the keyboard (control knee for keyboardists playing sitting!).

The clavioline was cleverly designed to come and settle in a piano keyboard or organ, to enable musicians to be able to play as a secondary for the sounds of strings, brass and solo melodies (in 1947 feet X n'taient not yet a standard ..) - the implementation is very simple: plug the clavioline let some heat lamps in use on ... scne (for adventurers of vintage) the controllers button pushers are a direct rgal for ACCS to the sounds desired

The clavioline is a UFO ..> immortalized by the Beatles, John Lennon is one who plays in "Baby you're a rich man" in the Tornadoes Telstar (the sound of space is him!), Del Shannon, e Ennio Morricone "A Fistful of Dynamite", John Barry, Esquivel, Bill Ramal or Jean Jacques Perrey (who used mostly ondioline) - still quite useful for acute mlodiques lines, psychotropic or shrill in the 60s and 70s, today it remains absolutely the style of the day, with more than a size that will delight fans of drum & bass: his bass subs, very attacking, filterable and octaves with one stroke of button. ..

An organic instrument, robust, reliable electricity (mine is in perfect condition and even on stage he never betrayed!), Which allows you to experience the unique feeling of playing actual music on an instrument of direct fire a book by Jules Verne ... incomparable for anyone who would like to know (see), take a look at the very complete http://www.clavioline.com

See all 32 photos of Selmer Clavioline »

Selmer Clavioline manuals and other files

View the 5 files about the Selmer Clavioline »