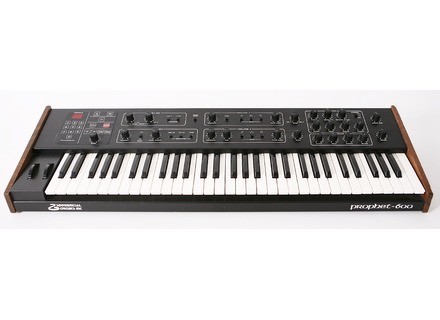 View other reviews for this product:
Sequential Circuits’ Prophet 600 is a vintage analog synthesizer. It’s got a lot of versatility, and is actually a bargain considering the price that these go for used. The keyboard spans about four and a half octaves and it has both pitch and modulation wheels. It’s got pretty standard connections in the back, and this is actually the first synthesizer to have MIDI capabilities!

The sounds on the Sequential Circuits Prophet 600 are definitely versatile to say the least. In general it certainly sounds like an analog synthesizer, but it isn’t as clean cut as some of the more expensive synths out there like a Moog. There is a whole lot that can be done with the Prophet 600 if you know how to use it, and I’ve really only scratched the surface thus far with it. It’s probably best suited for use in the recording studio since it’s an older synthesizer, but no one would argue if you wanted to use this for gigs.

For the price that these can be found for used, the Sequential Circuits Prophet 600 is one of the best deals for an analog synthesizer that I’ve seen out there. While definitely not as great sounding as some other analog synths that I’ve used out there, this does have as much versatility as any of them. If you’re looking to get started with analog synths or simply add another color to your collection, you can’t really go wrong with the Sequential Circuits Prophet 600 if you can find it at it’s average price.
Did you find this review helpful?yesno