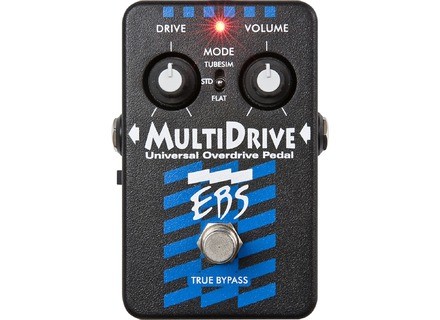 MultiDrive, Bass Distortion/Overdrive from EBS in the Black Label series.

View all offers for EBS MultiDrive »

Krais's review (This content has been automatically translated from French)

pad an active / passive on CTBR />
simple, and complements, nanmoins by qual

Super easy to use

The sound is gnral trs good and has really low.

I use it for one month and I'm glad trs, EBS is a great brand effect for bass. I recommend this bass pedals all playing in a trio seeking a big bass sound distortion

the absence of eq is not pnalisant ultimately (for me anyway)
Did you find this review helpful?yesno
»

johnbassiste's review (This content has been automatically translated from French)

EBS MultiDrive
5
There are three possible distos diffrent on the pedals, a volume gain knob.

Too simple to use!

The disto lgre (limit indicernable) in its most fat exists, you can do anything!

I play on this for over two years and is the best of the best distortion issue "that changes a little BOSS" ... I advise all bass players largely dsireux overdrivesques of experiments.

lbgo000's review (This content has been automatically translated from French)

Extremely simple, no need for manual

Top, it grunts - for those who want the overdrive does not change the character of the sound of your bass and already includes the high-cut filter (the type Jack Bruce, JP. ...). Jones If you want the thing that changes drastically the sound - happiness is not going to MXR example.
I use that tubesim - enough for me - just to give the color of a tube amps - that's what I tried.
Standard - one can tubesim the same as with the more sterile sound.
Flat is a strange kind of fuzz - I never use it.

Indestructible, compact, value, eats batteries (I do not care - I have a battery) can be recorded live, dear - what EBS.
I love it. If I have money I will test out the valve drive but it is big and heavy and I do not want to have back pain (I'm almost there).
Did you find this review helpful?yesno
»

MetlFixxxer's review (This content has been automatically translated from French)

EBS MultiDrive
5
Dj good level design, no surprise: it's heavy and solid as the MULTICOMP, the EBS pedals what. Button Active / Passive is against a real button that is activated at the touch of a finger, not a tiny piece of plastic dplacer latralement with a pen, a good point. CHAC battery is still tedious cons: you have dvisser the bottom plate held by four screws. One more reason to buy a good diet like Visual Sound One Spot, for those who are not yet convinced

The beast has two knobs: Drive one which determines the amount of saturation and volume to adjust the diffrence in size, simply. A switch to switch from one mode to another: Tubesim, Standard and Flat. No legalization in the spirit of this SERIES of EBS pedals: simplicity and efficiency. And it works!

Standard mode applies a distortion as the mdiums and acute, leaving the bass almost intact. Your exact is truly stunning, which ensures dsquilibre: the sound is saturated (more or less as you gots and desires) but still keeps the characters and the basic sound loses absolutely no serious frequency drives, on the contrary!
The method works the same Tubesim Manir but adds a second simulator lamps, according to the document. Basically, compared to the standard mode, the sound is more pais, with more harmonics, saturation is also more Submitted and sound a bit compressed forcment, and I would say that all rings rounder.
Flat mode, for him, not me Submitted intrt a limit: saturation applies across the spectrum, so the bass are not Epargne or strengthen . You lose a lot in frquences serious distortion is much more cantankerous but draft.

I use to give more MultiDrive my characters sound. I play an Ampeg combo transistors (B3158) with a 4c Ibanez BTB 6 string active and active Harley Benton, lightweight with a chorus and a good amount of compression (with EBS MULTICOMP). I play with fingers and mdiator, mainly big sound. I found what I was looking for thanks the pedals: a sound that "growl" well, with plenty of acrimony. To do this, I use the standard mode with the third Drive in assets. So in the end, trs little saturation, complies with the pedals dynamic game because when I play quietly, hardly has not saturated (as against it hotter!) And I started ds bourrinner, a growl! : D
I noticed that the mode Tubesim puffed a bit frquences Aiges, and I guess it's voluntary, helped reproduce the sound round and hot lights. Therefore I would prfre Standard mode, which is fewer concessions in frquences Aiges, which adds just the right amount of saturation and gniaque like a great big amp lamps .

Obviously we can use it as a pure overdrive, it can go far in the trs saturation, especially if one has a low active and that the RULES of Passive, but the advantage over for example, Boss ODB-3 is that the overdrive sounds much more natural, less synthetic and more alive, especially the bass is well preserved (except in Flat mode).

A multi-purpose pedals so that the sound can be used as Global Warming, give a little growl and resentment, or overdrive pedals as carrment saturax, while remaining clear trs and Dfine. Whereas an investment urgently!
I would put 9 because it is a bit CHRE, but it is worth its price!

Did you find this review helpful?yesno
»
Read the 5 user reviews on the EBS MultiDrive »

See all 287 photos of EBS MultiDrive »

View all 7 videos of EBS MultiDrive »

EBS MultiDrive manuals and other files