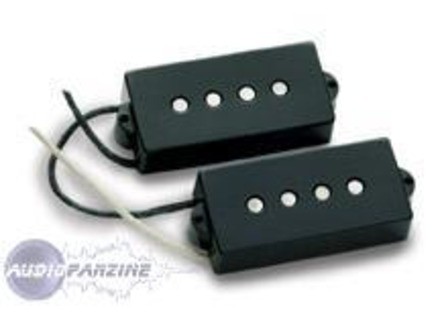 Seymour Duncan SPB-3 Quarter Pound for P-Bass
4
Micro Precision Fender style replacement.
I had used to replace a microphone on a Mexican Fender. The result was "a little better but not transcendent." Notes can be a little more defined, but no radical transformation.
Replacing an old Di Marzio on my Vox, I gained a little serious.
In both cases it was better but not revolution.
I think this mic can be advantageous in the case of an upgrade from a low average range with a violin correctly.
Attention son delivered over not very long, you need to know to play the soldering iron.

Seymour Duncan SPB-3 Quarter Pound for P-Bass
4
Mount on a Fender Precision passive flat with mesh, used mainly in DI in a home studio, the sound is bold and deep.
It's a combo micro / low bit versatile, powerful but trs.

Really good for the Dub / Reggea see his 60's to the modern Motown (the sound palm + string plectrum is excellent), the choice of musical styles, however, is restricted to the micro CHARACTERISTICS: the bass is supercharged with respect to mdiums / treble, and you can blame him a certain lack of precision attack of the strings and therefore clarity and finesse.

Stay vigilant for other musical styles (I think it is not suitable for the Mtal, Pop, and even the Rock on which the microphone will miss high-medium, may operate of course, but there is more adapted I think).


I tried microphones kinds Jazz Bass, Musicman, Fender passive Pb basic Active EMG-Pb, the SPB-3 has a character all its own, it is love or not.
I buy it without problem: very special but in the case of my use, it is efficient trs. And what the price really ...

regup's review (This content has been automatically translated from French)

Seymour Duncan SPB-3 Quarter Pound for P-Bass
4
I use the microwave recently. I replaced the pickups on my bass, which origins taient a bit dull by MODEL.

The particularity of these microphones is that they have a trs his bass, a large output level, ideal for playing in bands of heavy mtal, Steve Harris, bassist for Iron Maiden those who do not become or be declared, to use them.

Price quality ratio is really a good trs MODEL I highly recommend it. Turn 85 is really not much and it sounds great

Being a fan of Iron Maiden and Steve Harris, he will given my desire to play bass, and since I can not really afford to buy a fender bass like him, just the exchange of such microphones gives her a pretty gal.
View price information
Did you find this review helpful?yesno
Cookies help us improve performance, enhance user experience and deliver our services. By using our services, you agree to our use of cookies. Find out more.