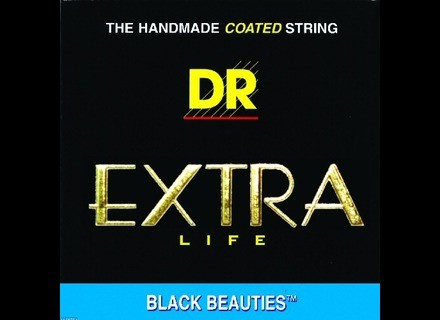 They are good because they look nice and have a round and brilliant sound.

They sound rounder than GHS Bass Boomers and they don't have that unpleasant percussive and "slappy" Bass Boomers' touch.

It's surprising because they sound more metallic and less dark than the Bass Boomers. The sound has a better definition and it is cleaner.

I find the Bass Boomers produce a muddy low-end.

With Dr Strings notes are more distinct between each attack. It becomes very obvious when you play fast.

The attack power is also easier to control than with Bass Boomers, even when slapping. (as a consequence, you'll use less compression and get a more authentic bass sound)

The sound difference is impressive.

The playing feel is special and it won't appeal to every bassist. They feel rawer than GHS Bass boomers.

But they have a weak point: they break easily near the machine heads if you are not careful when mounting them... so consider the length when you mount them on your instrument.

I was used to letting about 1" beyond each machine head with classic strings, which is what I did with the A string. The coating wore out pretty fast so in the end only the string core was attached to the machine head. I had to cut the string shorter and it happened again!

I had to buy a new strings set because of one string. The problem isn't the price but the delivery time.

I think it's possible to find strings with the same quality from other brands, but without this defect.

These are not bad strings but I'm not sure I'll buy them again.
Did you find this review helpful?yesno
»

superbrice's review (This content has been automatically translated from French)

Dr Strings Extra Life Color Coated
5
I use the MODEL OF EXTRA LIFE RED DEVILS (Red String) for the past three months to see a little bit more.
At the longvite, nothing to say, they look at the new touch.
I bought these strings, certainly for their quality, but also for their color, which go well with my LTD F-104.
Of course, I play hard enough, but the part above the microphone is turned white, thus wasting a bit of everything.
Otherwise nothing to say, very enjoyable also strings with a finger mdiator.
Oh and do not forget the detail that kills: The sound of the strings is simply demonic! They both come out good sound fat on the fourth a good sound slap on the others!
I put 9 / 10 because of the color that is deteriorating.
Did you find this review helpful?yesno
»

Gus7.0's review (This content has been automatically translated from French)

Dr Strings Extra Life Color Coated
5
DR Strings factory hand, and covered with a protective coating.
It's been two months that I use on my Ibanez SR 800 (given in B), and frankly, I do not think the strings of good quality could influence the stock of The definition of sound! The attacks are trs prcises, excellent sustain, and actually quite rare, the B string sounds exactly like the others (I tried trademarks, and often a horror on the Si ..)
Equally important, they have absolutely lost their brilliant original, while I must admit, I sweat a lot of hands ...
The strings are DR rputes to last, according j'diterai notice, for now, it's as if I had just put them on.

Well we should not forget THE CHARACTERISTICS of these strings: they are black! (Also come in blue or red), it is true that changes nothing in terms of its quality, but really its effect, the head of other group members when they saw the ropes black, excellent!
Some pictures of my bass:


Painful when the same: the strings are not given! I have command in Germany, 40 euros per set of 5 strings, all fawns, impossible to find in my house (dj play a 5 string is not empty ... )
But I'm really happy of this purchase, and many APRS trial in a lot of marks for my Ibanez sr dornavent remain in DR!

[edit]
Montes in January 2006, PRS was a year then, and they have not changed much in sound, it's really good rope!
The sound is a little dull, but the strings did not have much brilliance, so has not changed much, however, attack and sustain sound like the first day!
For cons, the color fades a little in the attack right hand (I play with fingers) and a bit on the smaller rope at the Premire boxes (srement of friction of the hand left there) but nothing dramatic, sincrement, I thought the coating would be less strong, but not a take!

In conclusion, these strings are Chres, certainly, but in a year, I change usually three times the complete set, so is cheaper in the end, not to mention the sound that remains constant. And as has for me, I do not change for now, so a good buy trs I do not regret.

Camy_x's review (This content has been automatically translated from French)

Dr Strings Extra Life Color Coated
1
I have used 2 hours ... and SHIT !!!..."" WARNING NOT FOR PASSIVE LOW !!!""... and yes the thing that makes the strings all black and all beautiful ... "IS A isolate "... so the electric blow Buzzzz has no end and then have to put the hands on the bridge! .. do the test with an electronic multimeter you will see they do not let the juice. .. 30euros veiled in the wind !!!... lool ... if a vacuum Sounds of hell and I'm going to the cast, I board the essay to scrape black thingy on it ... a serious grip! ... almost impossible to smash ... almost ...
PASSIVE LOW THEN GO YOUR WAY! ... And attention also to those who have an active preamp with strings connected to ground, there is the EMG which exeption of my knowledge ... and I think that's the same same shit for Elixir strings ... sniffff = (bin strings haaaaaaaaaa black beauty ... damn !!!... they were too good!!

Did you find this review helpful?yesno
»
Read the 12 user reviews on the Dr Strings Extra Life Color Coated »

Other categories in Bass guitar parts and accessories