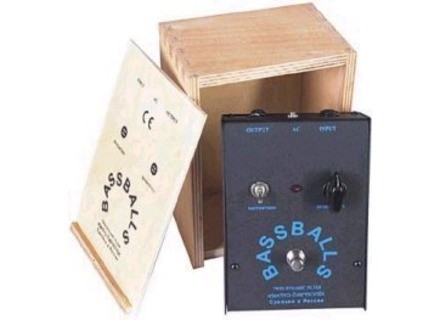 Average Score:4.3( 4.3/5 based on 2 reviews )
Value For Money : Excellent
Not satisfied with those reviews?
Our members also liked:

moixjj's review (This content has been automatically translated from French)" Grrrvvvvvzzzzzyouuuuuuuu!!"

Electro-Harmonix BassBalls Russian
4
Ah ... the Bassballs! Necessary because preventable, because the fundamental absurd, monstrous because a breeze. I bought mine a few years ago at a ridiculous price. After receiving it I plugged in, it made Grzviouh! and I stowed in a closet. Every time I emerged, the musicians of my groups I fucked outside the space. Snif!
Recently, after having unsuccessfully tried to get myself a fuzz pedal (an atrocious failure) I took apart my Bassballs to see what was in her belly. "But? What is this ugly little things in plastoc cheap? ... But ... they are knobs !!!???". I could not believe, EH hid the knobs control the wah and distortion in the beast! So I removed the dirty stuff, put real knobs instead (for my fuzz), drilled the box to get them out, also changed the power catastrophic, reassembled everything, plugged ... and ... yeah! I finally had something workable in front of me. Then drive Simone! The

Bassballs is a dynamic filter. If you tap on the strings, if we have a lot of treble, so it was very serious, if you stroke ... the sound will change a lot. Hence the importance of having access to wah and distortion knobs. After the sound is dirty, low-fi and hard to master ... but fantastic. It should be used once in a concert for 2 minutes but it star wars in a bunker Belarusian (with distortion). Attention however with the difference in volume mode distortion. It also produces a lot of feedback, so if you are facing his amp, it will ring for 2 hours. You can play with it and it's funny. I used to make tablecloths noisy, not to make riffs. Playing with the feedback I leave sounds incredible.
But beware young padawan, too Bassballs bassballs kills.

The sound quality?? Ouarf! Impossible to assess. You either love or hate. I love this side of hand and disgusting. Unbelievable that they released this thing on the market ... but it's great!

GGGGGRRRRRRRZZZZZVVVVVIIIIIIIIAAAAAAAAAAOOOOOOOOUUUUUUUUH!
The pedal is the most absurd I've tried. After modification, but it is a killing to be used sparingly with extreme pain of being strangled by the other group members. I will use it tonight in a room of 300 people, no idea how it will react in this environment electro-static ... that is its charm