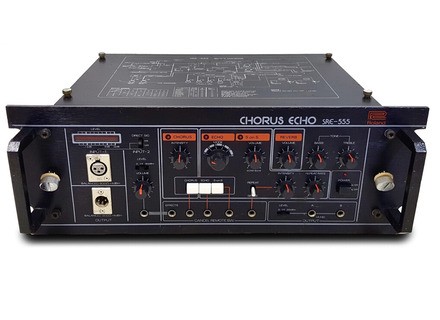 The Roland SRE-555 is a chorus echo device, designed for use in the recording studio. It is made up of all analog parts, with XLR and 1/4" connections, both of which are located in the front. I'm not sure if it has more connections in the back (which is probably does), but since I've only used one in a studio, it was already in the rack space and I didn't need to look in the back of it. It is indeed rack mountable in a traditional rack space and will take up four spaces as it is pretty large.

Using the Roland SRE-555 did take me a little bit of time to get used to, and I still don't know all the ins and outs of it, but using its basic features is pretty simple. The chorus and echo are split up into different sections, so that is easy enough to follow, and in addition there are a slew of other parameters and setting controls to work with. They aren't the most ubiquitous parameters in general, but most of them will definitely be familiar to those with experience. A manual isn't necessary, but would be a good idea to have around if you think you would have a hard time deciphering it on your own.

The tones that are possible with the Roland SRE-555 are quite versatile, with each sound bringing something to the table. I definitely like the unit best for its echo tones, but the chorus sounds are also thick and juicy as well. It is suitable for use with any and all instruments and voices that you might want to use echo and/or chorus with, as it is a versatile unit capable of adapting to most situations. While not as warm sounding as the original Roland Space Echo, the SRE-555 definitely has its own vibe and offers up a lot in terms of overall tone quality.

I've only ever seen one model of the Roland SRE-555 in a studio I've freelanced at on a few occasions. Judging from this, I don't think that this is the most popular or easily found unit in Roland's line of gear, but it is still a piece of equipment worth investigating if you're into older analog effects. I don't even know what one of these would cost, but I would guess that the price wouldn't be outlandish by any stretch. If you're looking to expand your outboard effects and need either a chorus, echo, or both without having to spend a ton of cash, I'd definitely encourage you to at least do some research on the Roland SRE-555 to see if it will fit into what you're trying to do...
Did you find this review helpful?yesno