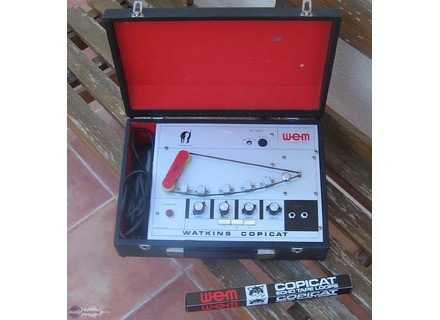 The device is very "rough" electrically speaking. We are far from the CE ...
In fact I recommend placing it behind DI boxes, it makes no difference to the sound, and it's safer.

Publishing side, the few available settings require no explanation, everything on.

Only regret that we can not vary the speed of the tape for even more possibilities. So I put only 8 lol.

The sound quality is amazing. Grain but little breath, a fairly good momentum actually.
The craziest is that as soon as the active one begins for Floyd or King Krimson is unstoppable.
Reverb procured quality is amazing considering the techno used, it is hard to believe ... and sometimes almost too well.

In use in "modern music", it is best to book this effect in solo parts well in advance to benefit grain background, as if using a lambda reverb plugin.

I received this machine 2 years ago from a friend whose father, a great "cursed guitarist" died a little faster. It was broken and had not turned 20 years. I repaired and returned to service so it has sentimental value for me.
That said beyond affect, what a sound!
Did you find this review helpful?yesno
»

latza67's review (This content has been automatically translated from French)

Wem Watkins COPICAT SOLID STATE WATKINS
5
Tape echo: echo of the slap up to the feedback delay which would be fully
Transistor technology (70's)
Not editable
Connection jack: 2 inputs with a gain per input / 1 output
Pedal

The effect (of slap back delay in the endless ..) is splendid: the pure analog
Guitar, bass
I like everything

For a long time in search of a compelling time, that is this one that touches me the most
Unhesitatingly

The pleasure of cutting the tape, put the wheels on his drive and redo the same actions as Pink Floyd were at the time of their concerts in London at UFO, psych period (even if they were using I think of Binson echo tape), is a real time travel

7 of 10 people found this review helpful