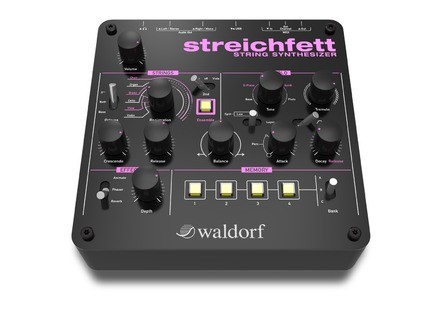 Buy this productView price information >
View other reviews for this product:
Read the pro review.

It's the first instrument I have bought new since 1981. Among the old machines I have kept are three string ensemble that I love and still use 30 years after they came out: an Eminent, a Yamaha SS30 (the first Yamaha string ensemble) and a Korg PE2000 (not really a string, more of a chorus+brass ensemble, but beautiful all the same). I also tried some Italian models (Elka...) and tasted Roland's sweet strings (RS).

Saturday, by chance, I stopped by a local store that had received three. Sometimes ─ once a year in fact ─ I go visit music stores and hear new gear. And I always come out empty-handed, not having heard anything that stirred any emotions in me.

But the Streichfett really moved me.

The string registers, especially alto and cello ─ in relation to the whole, obviously ─ provide a very nice sound material in all ranges, less silky than an Eminent, but with a dynamic response that the old string ensembles don't have. It has a character that is very similar to the originals, even if the sound is not exactly the same.

The vocal register, at the beginning of the travel, gives ─ always in relation to the whole ─ a layer of choirs that resembles a VP330 a lot. Gloomy and rough.

The solo section, and its very nice amplitude modulation, allows you both to find the "cheesy" side of the original instruments (like the old Elka), but also more modern things. Especially if you invert the classic settings: A slow attack on the solo and a fast one on the strings, rather than a slow attack on the strings and a fast one on the solo...

The "animate" function and the phasing aren't any good. On the other hand, the reverb sounds fine.

I'll give you my musical and business opinion.

Business-wise, I can only praise the innovation of SMBs on the other side of the Rhine river. It amazes me that for $250, Waldorf can manufacture an instrument of this quality in Germany.

Music-wise, it's a cookie-shaped instrument. It's not the same as having an Eminent, or an Elka, it's not as sleek, but it's more dynamic and, all in all, it's very nice for a change.

If you love string ensembles, try it out.
Did you find this review helpful?yesno
Cookies help us improve performance, enhance user experience and deliver our services. By using our services, you agree to our use of cookies. Find out more.