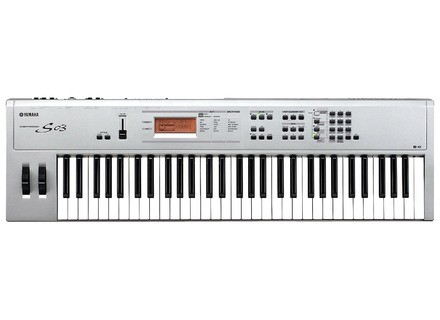 Yamaha S03
5
The features, as i said before, mean the difference between songs sounding very &quot;keyboardish&quot; and trite to sounding very professional. The feature that adds character to the individual instruments (resonance & ) can make ordinary strings sound sampled out of Bach's 9th symphony. Creative combinations of the reverb, chorus, resonance, and tremolo features can make a piano sound alive and fierce. So in short, the S03's features don't have that many features to work with, but, i guess, they grows on you as your skill grows as a producer.

Being a beginner's professional keyboard, it is very simple to start with; or i should say that it was easy for me. I already had experience with playing the keyboard before, and the MPC 1000 was becoming second nature to me, so all i had to do was sit down and let it flow. Discovering the features later only added to the experience. But for those with no studio experience, beginning to play could be a little difficult. Sure you can sit down and push keys until your blue in the face, but until you understand that certain instruments resonate better with certain others, producing off of the S03 could be fustrating.

The sound quality of the S03 is remarkable for the low price tag that it sports; but the sound can be tweeked to a much better degree, depending on the user. When i first purchased the keyboard, the instrumentals sounded very synthesized (damn the spelling), and i couldn't sell music for more than $150 after some strict negotiating. But nowadays, the music i produce is industry standard, without too much mixing and flipping, and beats go as high as $500 on average. But compared to the Triton/Trinity/S90/other high priced keyboard, the S03 seems like a beginner's synthesizer(damn the spelling).

Its built nicely.But then again, i dont' move it around, except to adjust it for usage. Im sure that things can go wrong, just like any other piece of equipment, if you man-handle it.

Its my baby...my first official studio keyboard. Sure, ive recouped back what i spent on it from the music that i sell, and yeah i could by the biggest, most serious keyboard around, but its like, you are so accustomed to that keyboard that you can work magic without having to experiment to much. Its like having Bruce Lee pick between a pair of nunchucks, a sword, or a tree branch against an opponent. Yeah, he can F#@$ em up with anyone of them, but the tree branch is more of an extention of his arm than anything else. Thats what the S03 is for me, an extention of my imagination and abilities as a producer. Once i get my website up, you'll see what im talking about.

Originally posted on FutureProducers.com
Posted by: The Beatmean ( 8-, 2005)
Did you find this review helpful?yesno
»

artusetmoi's review (This content has been automatically translated from French)

The sounds are really effective and fully customizable, trrrrrrèèèès many (too?)
It can save its banks of sounds on PC or Mac via MIDI with the supplied software.
touch is nice.

At first, we must understand what all the buttons, but once the system is an understood, it becomes very simple. Of course we can use it without all-inclusive.
The manuals are well made and there is a comprehensive list of presets.

As it can go very far in the editing of sounds at the beginning we find there are too many parameters, but that's what makes the quality of the keyboard (bank of 400 sounds and you can mix different sounds for each 4 instrument.

I used Master keyboard (with an external interface) and independent Synth (to learn the piano).

Perfect for a home studio or for live.

The sounds are very realistic for some (special mention for hammond organ!).
But above all they are effective!
That is, it always sounds so nice, and + we can share the keyboard to use the example above for the piano, the keys to the middle strings and keys down to the lower (provided that 'we have three hands!).

These sounds are suitable for any style of music because they are very varied.

I have been using for over a year, and I am perfectly satisfied.

Alas, I have to part with it (move: I am always on the move next year between the province and Paris).
The pros: - The sound (quantity and quality)!
- The price!
- The ability to change everything ...
- The keys octave + / - handy (used during the game)

The -: - I could not bring him home every weekend next year, on the train it takes too much space.
- No USB port (you need an interface for connecting to PC (but you can find one for less than € 40 in USB and less than 15 € in joystick port (but less good ...))).