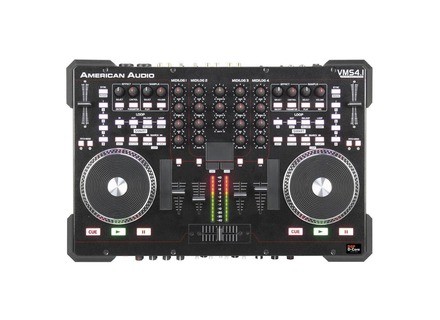 popol3313's review (This content has been automatically translated from French)" very good product for its range!"

American Audio VMS4.1
4
I bought it in February for 250 euros used, the boy came to buy it and found it too complicated to use so it was really brand new under warranty and so the price was unbeatable. This edition is provided with Trakor Trakor LE which is good enough to himself, can control 4 channel live so we would expect worse.

before I had a Hercules RMX the big stew, it makes me more tired than anything else in the mix, you can do anything with it quite suddenly gathering dust. I sold it for a hercules 4MX already much better but over time it's not worth the barely responsive knobs and buttons play / pause like the bar where I regularly mix has the same model then c ' is not an isolated case! damage because the sensations, especially with the jogs are very good it was a good machine ...

So first impression when opening the box ca throws! template impressive almost 1 1/2 times the length of a PC 15 ', end up perfect, nothing to say about it. Jogs are the same size as the 4 MX, diameter of a CD audio bit ready so frankly it's not so small that ca. Compared to the pictures you can see it does has nothing to do, it almost looks like that ugly but when it was to be, the real thing is the day and night, was the ca thunderbolt for me! damage of aillor ... Rubber buttons are quite hard as the numark and they are spaced enough for big fingers so no problems there's the place!

For technical, just look on the website do not need to itemize

Mix in it is impeccable, ca responds well, really well. Almost zero latency exchange hercules ca! Velcro jogs respond very well, it is not a latency of 0ms agree but they are pretty accurate so it is enough. Very good grip of traktor, almost all commands are accessible directly with the table, there's some small beuges with controls loops including, but nothing too bad. This is due to the mapping of most AA but you can find better on the internet.
The sound is excelling, I used canned there's no long the sound is good. Some small grésillages when acute are a bit too strong, but nothing too bad. Low, however, are perfect! Profondent without being brutal, a real pleasure!
Tactile strips on the side to navigate through menus and song are really handy, it's pretty original and I like it anyway

The only negative points I note that the buttons are not always react very well be strong enough to support that it works for some, but the problem comes from the fact that the buttons are not independent, they are blocks. There's the block cue / play / AD or BC, the block cue points and loops the block, activating effects of stroke by pushing the buttons on the side there is a small game and they décallent slightly. If they shift too must press hard enough so that it ca react, but once you give them to be right near remarche nikel ca. I assure you that even when it happens very rarely it's really not bad, as this can happen on hercules, they are not being blocked by sunken in the overall structure.
We also note that the volume knob is very sensitive to the headset, the sound comes suddenly, but by lightly tapping it comes to find the volume that suits us just need to be careful not to early to take the full ears!

So here is basically what comes out, it's very good stuff, surout for its price range for 300 euro if you want a little you have a 4-way full! this is not necessarily perfect, but perfect for its price range it is unbeatable, even next to the numark n4 in my opinion and I would do it without hesitation NIOHC. AA well learned from his mistake with the first version and corrected all major defects, ca gave them a very bad reputation for suddenly it's a shame for them ca gave them a bad pub for version 2. .. Remains to be seen over time but it is good so that mistreats not I do not think y'ai problem

American Audio VMS4.1
4
I used the product two months.
I have tested similar products of the Hercules brand.

What is interesting is the side independent of the PC. This control is quite usable without PC as 4 channel mixer.
The possibilities are quite numerous connections. (See features)

The quality of materials is correct. Many plastic but solid.
The rotation of jogs is well controlled.
I've had no problem with assigning Traktor PRO 2 (provided that we find the right IST)

I did not like the touch areas for PC navigation. I found them too sensitive (I have not looked to see if we can resolve them). I prefer the keyboard or mouse.

The headphone output is also very sensitive, a millimeter you double the speed of sound.
The EQ knobs are not regular. Some are hard, others not. But nothing major.

Regarding sound quality, the table was connected to neutral enough of Monitoring. I find it especially right next to the price.

In conclusion, the monitor has a good value for money. And I think this is a good choice to start in this area.

About competition, you will find the Numark N4 in the same price area. Denon or MC6000 at double the price with a table also independent of the PC (possibility that you will not have the Traktor S4 or Pioneer) but with the quality Denon.

PS: If the use will be made with Traktor, consider the special edition Traktor. The price is slowly becoming the same and you will have a more appropriate ergonomics in Traktor ...

American Audio VMS4.1
How long you use it?

Its many inputs and outputs, the mixer 4 channel digital / analog, both pickups Controls: gain, bass, mids, treble, particularly robust chassis and metal case, large rubber bumpers at each corner, the touchpad to navigate without a mouse (although I prefer the mouse is faster), and finally its PRICE: 369 euros.

Adjusting the headphone a little too sensitive (the volume comes to a sudden attention to ears).

How would you rate the quality / price? Excellent!
numark better than a price equivalent to N4 (389 Euros).

With experience, you do again this choice? ...
certainly, because I am so far not disappointed with my purchase (I use it every night since Feb. 11 evening and I must be the point!).

Published on 09/18/12
The VMS4.1 is a digital workstation that can be used for both computer (PC or Mac) and analog DJ-ing.