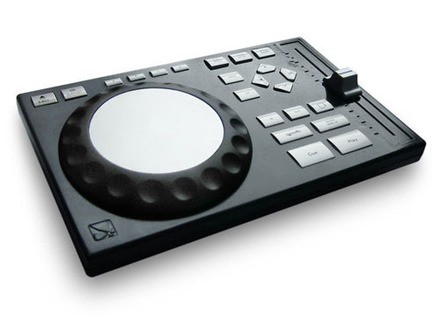 ti2l's review (This content has been automatically translated from French)

EKS XP10
5
Signal to noise ratio 105 dB
USB connection
Chaqune plates XP10 has 2 RCA (Stereo)
Use with Virtual DJ trs friendly, but holds it is out of the catre PC sound is out of the mixer which are re-read the XP10 by RCA

The installation is very simple, it connects or decks and it launches Virtual DJ or Bison (software that came with XP10), you can use a plate that in turn affects a track or other (in the software mix)

The manual is clear is sufficient even if it is short ... nothing too complicated really.

The appearance of the plate is unfortunately not uncommon, the buttons are hard plastic and have a race trs weak, Drout to beginners ... but fact is it is reliable in the end!
In short it works is that the Essenciel, we can finally scratch with MP3 logs on his PC ... recess must be an adjustment period as the "wheel" Scratch is less than a vinyl, you have to make smaller movements prcis longer ... trs works well for a house and other music lctroniques but a scratch hip hop I do not know ... I mix mostly of music lctronique ... hip hop scratching on the vinyl "crazy B" or "DJ Keops" requires a lot of learning as so ... try!

No drivers to use with Virtual DJ or with Bison ... MIDI drivers are in beta ...

I use it for two months with virtual DJ ... I had no concern for software or hardware crash.

Regarding the price quality ratio is a bit deu reoit when the plate because everything is plastic ... but ultimately a good working.

The "wheel" is scratch aluminum plate with a touch ... barely touching the aluminum ... the "disk" (virtual) s'arrte more that turn the wheel to scratch, here we go !!!!!
Did you find this review helpful?yesno
»

pissou's review (This content has been automatically translated from French)

EKS XP10
5
I had enough to mix with Virtual DJ with my mouse and my keyboard. Dcu by Hercules DJ Console I bet that I try this product.
I mix in discothque, but rgulirement accessories for Students.
My config: Laptop IBM 1.4 GB / 512 MB ram
I use my XP10 with trs gear is varied depending on the benefit.

XP10 to install, just plug in each USB port on the pc ... not too complicated to install any driver softwares Bison or VDJ. (The other is the driver midi)

No configuration particulire end, key dj are allocated, it is possible to motifier attribution in VDJ.

The manual is virtually useless, one hour is ncssaire the grip.

No problem of instability up Submitted. I met a concern once, but by connecting the PC to another outlet the problem is gone. The sound from the map intgre is excellent.

I use Virtual DJ, despite the fact that Bison trs is correct. It is a matter of habit.

I was not finding the latency, there is a hand to the touch plate Ragit trs well.

I use it for several months, EKS (the manufacturer) has a simple but reliable product. Once you rack like a pro DJ numrique so the design is class!

I tried everything that is in the field of information technology for DJ, it's my favorite.

The price is a bit lev but the benefits do I do with are just as important.

Trs a good investment for me .... a try!
Did you find this review helpful?yesno
»

Deejay#seb's review (This content has been automatically translated from French)

EKS XP10
5
Here is the link for technical characteristics of the controllers
www.xp10.fr/xp10.htm
As for the PC as well as mobile office should not be a big nickel config running on a laptop celeron 900mhz with 256 MB of RAM with the interface Bison, because I did not try with VirtualDJ the same time I do not like this software ...

Nothing is easier for instalation
you plug a USB cable and plug the controller a mixer
USB cables for my advice over a hub that plugs into a wall outlet as casually juice and a pump on a single laptop battery autonomy is reduced ... and desktop computers less have a very good diet I recommend also the hub unless you have almost nothing to plug in USB to your PC

These controllers are terrible ... p'tits
The stuff is very stable for my part I had no crash, both in private that evening.
The jog is super reactive and touch no latency whatsoever as well as the jog button is pressed and the direct part is extreme pitch bend jog but is also possible to switch to vinyl mode or cd cdj 1000mk2 like ...
The buttons are very well arranged and it is very intuitive, less than 30 min for the grip and the 1st music we find the same sensations as the pro stuff, there are four buttons that are assignable ... Not to be compared with the m **** of "dj console" because really has nothing to see ...
In addition there is a software with the xp10's Bison is 100% compatible ... this software is a simple qu'enfaite interface that displays information for your mp3 (etc. ..) and has VirtualDJ nothing to do with it too much to attend (even my mother could be the DJ to play with the tempo setting self ...) so Bison is rather reserved to the real djs who use their ears and not to a magic button for setting the tempo ... VirtualDJ is for novices who do not want to take the lead.

It is now five months that I have XP10 and I'm really not deu, good quality material for manufacturing strong and I had no problems during that time.
I love the jog that is neither too heavy nor too light
I am a bit of finish that makes a little plastic
Quality level is more qu'interresant prices.
With the experience I will not hesitate to make the same choice.
It's the high end for mp3 like cdj 1000mk2 is the high-end turntables cd.
Did you find this review helpful?yesno
»

EKS XP10
4
I turned to these machines to play what I write without being forced to burn to cd (do not even speak prssage vinyl slab, because then the !!!).
HAVING tech1200, I looked at the beginners' timecodquot, but what's the point? except if you only play with his gear, I could not see myself in the process of arrive in the rg and any hack to wire my stuff before the eyes of the guy who owns the sound, and what each time.

So I chose this system and the rack with their table I need is an outlet, an audio input on the distribution and less than one meter of place ...

connection between table> effect> XP10 cinch in quality of "blah", usb cable for superior quality than those shipped with xp (without saying they are from the blinds because I see too ferittes shielding tudi "scne" on the usb and then tell me faudrat o. ..)

usage: public, we APRS am rmunr or not there is no gap.

Win XP instalation is as simple as plug a floppy drive, the XP10 is recognized as the speaker usb.

for I had an incompatibility problems with a hub at beginners, then I have cable directly to my BCAN ports and over any worries.

configuration software dpendra employees from the configuration instantly and automatically without doing anything in the drivers galre noon.

the software comes with (Bison) enters the first case.

The drivers are from Windows XP and have done everything stable.

up days so, often not!

I use the software that goes best with, know Bison, he did not envy other software currently available mix, it is simple, clear and above all, what my taste is important: it does not crash ever .
dpourvu software is all the "bazaar" proposed by the other and finally not used much (except the possibility to complete), can be put hand to force the eyes to the lot of things displayed the notch.
It is against that must be emptied at least know how a beat or have the desire to learn the know how to use it.
it accesses any "magic mix" and everything must be done traditionally, even if may seem a be a minimum, on the contrary, one more: when it's used the "mk2" the Getting started is IMMEDIATE kasi, you just learn to touch to it even when (and forcment) Different.
As such it is trs intuitive in the sense that it is in the same ProCD Manir on vinyl and mp3.

It's been about 6 months I use this system and since I can play my perfectly composed with serious quality and I had previously tried the console hercules, the I turned to the timecode until I drop the top, I'm pretty satisfied with this way of playing and I do not regret at all.

I think in terms of mixing file selection can not stop on timecode or XP10, I have chosen these dernires for the reasons mentioned above and I know today that jai well to make that choice.

on price, if it comes to mixing quality is impeccable, at the same place in him c pricey (but it's true that I find it too expensive!)

the machine, from the materials used to manufacture hard to express its capabilities, namely precision, reliability simplicity.

it certainly does not forget that the good are only skeuds vinyl, but that will change may be judging by the fact that some labels are starting to sell mp3.
That said my goal n'tant not replace good old pancake, but to arrive one day only play my songs, so .....

in a résumé is not a product of the "fire god" but a c trs good concept, as I would put a good 8 out of 10 trs
Did you find this review helpful?yesno
»
Read the 7 user reviews on the EKS XP10 »