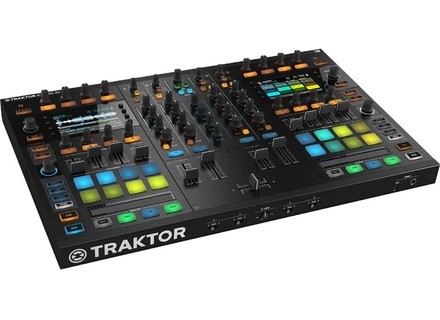 All user reviews for the Native Instruments Traktor Kontrol S8

Fillius's review (This content has been automatically translated from French)" Perfect!"

Native Instruments Traktor Kontrol S8
5
I just bought the new Platinum Native there one week. So I did not test everything (even-if I spent a lot of hours). My opinion is a bit biased by my lack of experience with the S8. However, the first impression is often the right one.

Previously I had different plates, the last was the S2 from the same manufacturer as the S8. Suffice to say that it takes a real slap in between.
First, it is more robust, it is actually much less gadget. The finishes are very nice, all faders, pad, seem solid.

One of the great qualities is its compactness. Having tried the Pioneer DDJ-SZ many times (certainly not the same software or the same machine), when one travels often we are glad to have the S8. Which is easier to carry and offers the same qualities (personal opinion). Maybe we lose space between decks, fader and the rest but it is minimal.

One of my biggest fears was the famous screens. It was a little double or quits. In fact, their record is very correct. It should be noted that they do not touch, but there is a "hover button" to access the library computer. Personally I do not regret the touch. (Then the price would have been different too! ^^)

The second issue with respect to these two displays was their utilities. This is true of a logical point of view if there is always the computer and open traktor. What are they?
Personal well when we play live we gain greatly. First time since he happens to have the computer almost face to be and it's always annoying to not see the audience. And even if it is on the sides of the room view is lost, the head is rotated regularly. We often have our eyes on the computer. With two screens, the computer maybe three miles instead of platinum, we are focused on gaining technical and interaction with the public. Especially you can see all the actions that we do with the two screens (it is on the remix decks, effects ...)

Novation Twitch tried with the proposed deck without a jog. This was more less a failure, I think native has reinvented the Twitch. Even this is not the basis of them. And probably more people today is close to separate jog and of course the S8 offers superior comfort for Twitch.

New features are, Freeze mode already on the traktor / Ipad, which was sorely lacking on the other decks. Attention now the S8 is not compatible with the software on the iPad. I hope that day will come ... ^^
But also more than jog, so beware I think this issue is personal to all amateur or professional DJ. For me, it's a long time I did not serve me jogs on a plate, especially because I did not have utility. And it is true that suddenly I was forced to invest in other devices to expand the number pad present. With the S8 space jog removed, allowed to add space for additional pads. The strip is very functional. For pitch bend can also use the TEMPO in the center of the deck that offers more comfort to evolve its BPM.

And especially the remix decks. I found the interest of Traktor in this options there. But so far the run with the S2 or S4 was always a bit complicated. Now they are integrated into the S8 a real extra comfort and above all it allows to change his live.

There are all outputs, RCA Jack or via the XLR. It's nice. And little more: the headphone output jack available in 6.35 or 3.5 jack. More fear when the adapter is not found!

The sound card deck has a very good made after each sees fit in its own way.

As I stated I would rather have no experience with the S8 required to review more developed. For day by day we discover new features and we learn.
So yes it is not in the "FUTURE OF DJING" but we are in very, very good for native. For the price, it is certainly expensive, but compared to other brands that offer similar equipment we are in a decent rate.

I am very satisfied with my purchase, I do not put the maximum score because I did not test everything. (And also because the flights Cases (S8) are virtually impossible to find now).

12 of 14 people found this review helpful

Dnhs5500's review (This content has been automatically translated from French)" Top notch!"

Native Instruments Traktor Kontrol S8
5
Already a user MK1 S4, I found the perfect interaction Hardware / software.
All the functions meet the finger and the eye (with screens)

This S8 compiles more or less the functions of a 2F1 S4 but with a "quality" a cut above.

Hard to explain but the faders and various buttons seem more "solid" to the touch.
The "face plate" also appears in metal or other alloy which gives a slightly more opulent appearance (compared to the S4 / S2)
The fader / cross section of the mixer seems (for security forces not tried) removable independently of the rest with screws (which augurs a replacement easier said faders)

The setting of the cross cut is effective.

Some small features are nice to use:
eg
- Activation buttons on / off filters that allows "brutal" change filter
- Post fader effects ... finally! (The effect lasts fader down)
(on the other hand it does not seem possible to have them in the pre listening? Or I have not found ... shame)

Personally, the lack of jogs and pitch fader does not really bother me because it is used with timecode mk2 so it is missing on the turntables ...

The screens are TOP!
Very good definition, one has access to the most important information (browser, effects, tempo, key, waveforme etc ...)
Sensory knobs are also excellent:
example, when a key parameter effective, indicating a band appears in all the parameters of the screen top and therefore before the eyes that is modified.
Ditto for loops, touch the buttons and the loop length that you are about to engage appears.

Level, it's all good too, the dynamics are excellent (good opinion on ... as never having to have external sound card quality thus not disappointed)

Yet not really disappointed with my investment.
Some will say "expensive for a controller" ... not wrong, but given the opportunity offered and what appears to be quality ... I would not worse (than many other products)


A look back in time and "intensive" use.