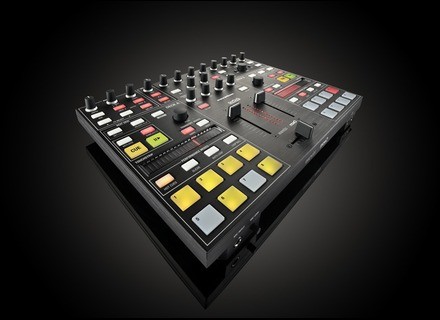 All user reviews of 3/5 for the Novation Twitch

Average Score:3.8( 3.8/5 based on 7 reviews )
Not satisfied with those reviews?
Our members also liked:

Novation Twitch
3
I mix pro since the last century, and with SSL for some years now.

I was looking for a controller for Serato (so Itch) in order to play more easily in tight spaces, or sets with several DJs.

Twitch seemed an appropriate solution, the journals on the Internet were all quite positive, especially the pads and mode slicer.

In the end, if I Adere to the product philosophy and Itch, which is an excellent software (especially since it allows me to use my library Serato SSL), Twitch is pretty disappointing, for two major flaws: Lack of Sound power output, and the effects shabby.

Using the controller is great, the lack of "wheel" does not hurt and can save space. The pads are fabulous.
As long as you take the time to prepare your songs (beatgridding, cue points, loops, etc.), you can really make MIXES live by mixing loops, samples, etc..

But the main defect is that Twitch is powered by the USB port: not only the LEDs are faiblardes (if you play outdoors or during the day, you see nothing), but mostly the sound power output is ridiculous !

ALL of the places where I had to use it (or Drinking large clubs like The Queen), it took me to all the knobs of the mixer (which I have connected my twitch) have to hope sound near the limit tolerated by the place! Even with the Master to build on twitch, the gains can not be pushed under penalty Limit.

In short, it's a big cat, as most clubs calibrate the mixer to the max to prevent DJs poussdent not too sound.

Finally, the FX are almost unusable. I do not know if it's Itch or Twitch who is the cause, but most effects are inaudible (the Echo, Delay, ...) or completely saturate (Flanger, Phaser ...) ...

In short, I have only one desire: to sell my twitch - perhaps - the Vestax VCI-380 which combines elements of slide and touch pads.

But it is four times more expensive.

In short: a nice controller for troubleshooting or small sets in bars or mobile, but to avoid using in Pro.