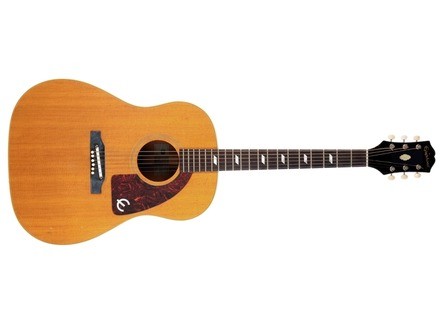 Epiphone FT-79 Texan
5
The Epiphone FT-79 Texan is a dreadnought style acoustic guitar from the 1960's. I believe the Texan guitars were made as early as the 1950's, but the particular one that I've used was from the mid 60's. The guitar is only acoustic as it's doesn't have any pick ups or electronics. This guitar is basically Epiphone's model of the J series acoustic guitars from Gibson, although I believe that this is from before Gibson and Epiphone were one. I don't know where the guitar was made nor the materials it's composed of...

The feel of the Epiphone FT-79 Texan is really something special. It's a super easy guitar to play as it's got that special fluid feel that's much like that of the Gibson acoustics from the same era. Since there are no electronics to play with, there's nothing you need to know beyond it's playability, which is really stellar. They don't make too many acoustic guitars that are more enjoyable to play.

The sound of the Epiphone FT-79 Texan follows suit with it's feel, as it's got a full bodied sound that sounds incredible when recorded. It sounds much like many of the Gibson model guitars from the same era, which are also some of my favorites. While I don't prefer this to something like a J-50, it's still an incredible sound and at a certain point it becomes about personal preference more than anything. The FT-79 is a classic guitar and has been used on countless recordings over the years, so it can definitely treat you just as well.

The Epiphone FT-79 Texan is pretty hard to find at this point, but they are out there to be had for sure. Of course it will cost you a pretty penny to acquire one of these, but that's going to be the case no matter what when you're looking at top tier acoustic guitars. I don't think I'd go with the FT-79 if I were to buy any acoustic guitar, but I wouldn't be surprised if there were some people who would! Simply a stellar guitar that any player would love to have or even try.