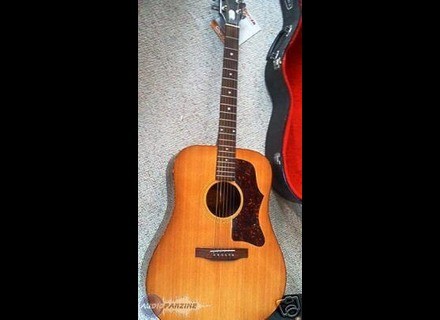 Gibson J-55 Deluxe
The Gibson J 55 Deluxe is a dreadnought style acoustic guitar that was made in the USA. It isn't an acoustic/electric so it doesn't have any pick ups or setting controls, but has a great inherent sound that sounds great when miced.

The overall feel of the Gibson J 55 Deluxe is pretty brilliant and feels great on the fingers. It is incredibly easy to play and is one of those guitars that you just feel really comfortable playing because of its smooth neck. Getting a nice sound from the Gibson J 55 Deluxe is very easy granted you can play a bit as the inherent sound is vibrant and quite full bodied.

I use the Gibson J 55 Deluxe mostly for recording and I find that this is one of the best guitars out there for this application because of its huge sound. While for some reason it picks up beautifully for recording, it is also suitable for live shows and is great for all types of music that you would want to use an acoustic guitar with including rock, pop, folk, and country. If you are after that top tier acoustic guitar sound, the Gibson J 55 Deluxe will give you that.

I've only been using the Gibson J 55 Deluxe for about six months but in this short time I've found it to be one of the better dreadnought acoustic guitars that I've recorded with. While I'm usually a Martin guitars guys, I'm also a big fan of the Gibson J series because of their stellar sound quality and certainly rivals that of those made by Martin. If you can find this guitar for sale, which is somewhat hard to do, I would highly recommend picking it up if you are in the market for a great sounding acoustic guitar that will last a lifetime.
Did you find this review helpful?yesno
»