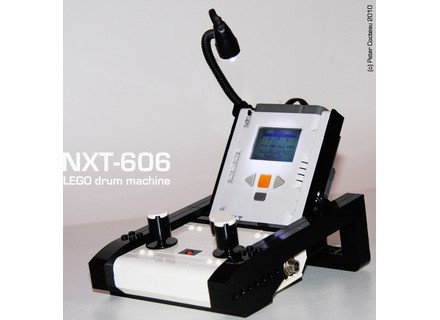 PeterCocteau's review (This content has been automatically translated from French)

DIY NXT-606 Drum Machine (by Peter Cocteau)
5
The NXT-606 is an instrument of my own creation. It is a real drum / sampler that allows users to create their own rhythms. It is fully designed in LEGO (c)!

The company started to LEGO Mindstorms robotics its range in 1998. NXT, a mini-computer compatible with the other bricks, is at the center of this robotic system. It can acquire data from sensors, control motors and even read small samples 8bits.

So from the NXT, LEGO rotation sensors and many other bricks that I have designed my Drum Machine. The NXT-606 is both an interface but also a program that has asked me three months of development with the software (still LEGO): NXT-G editor designed for children ...
The only non-LEGO parts are welded and a few jack.
-Monophonic
-Resolution: 8bits
-Sampling frequency: 2-16 KHz
-Bank: 24 percussion sounds and Fx
-Memory: 96 measurements editable
-Tempo: -40 to 180
-Swing: 0 to 100%
The audio-output to the usual mini internal speaker is diverted to a jack-6, 35mm

The left knob is used to access the menus while the right to change the values. It joins only two pages: one that includes the basic commands (play, save / copy, tempo, swing, etc. ..) and the second is neither more nor less than a graphics editor! this page is selected sample and assigns the velocity at each of the 16 steps of the measure.

In short, that is a breeze to program his own beats ... and we take pleasure in turning the dial.

The NXT-606 acts in real time without affecting the tempo and offers some refinements as Autoplaying samples when composed with the sequencer stopped, or the appearance of an asterisk indicates that a function is Waiting (new measure selected or stop waiting for the end of measurement).

The NXT-606 has a sound 8bits Roots well but above the machine delivers a fishery that has exceeded my expectations ... it did leave indifferent any of my friends musicians or engineers.

I have appointed myself the sounds for optimal rendering of the beast whose bandwidth does not exceed 8 kHz.

I created a 2008, only one copy exists currently. I have however posted a Light version of the program (June 2010), which enables owners Kits LEGO Mindstorms NXT to have fun with ....

Most connoisseurs will notice that as a reader of samples would have had to be called NXT-505 but what do you ... I am very nostalgic for my old TR-606 ...

Do not forget to watch the video on youtube ...