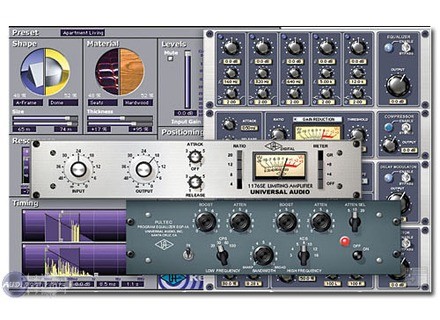 UAD-2 Solo, DSP Board from Universal Audio in the UAD-2 PCIe series.

WMD: Weapon of Mass DSPs Universal Audio continues its arms race against other DSP card manufacturers, like TC Electronic (PowerCore) and SSL (Duende), by releasing the UAD-2, which comes in three models that dwarf the original in power. We tested the most powerful of all: the UAD-2 Quad. Read more…

Laurent Width's review (This content has been automatically translated from French)" Great card!"

Universal Audio UAD-2 Solo
5
The primary motivation for my purchase was with that card I could save my CPU resource, but also the quality of these plug-ins intéressai me greatly!
I use Cubase for semi-professional use, I am an experienced amateur, recording and mixing I begin to know (without wanting me fart!)
Motherboard ASUS P5Q, E5600 dual core processor, 6GB of ram, seven in 64 bit ...

Drivers super stable, no or very little latency 5ms, I use a lot of plug-ins base provided the 1176LN and LA2A but also Plultec extra besides! RELVERB and pro ...
I made a recording session 8 tracks and I used only the UAD plug-ins about 15 with the card, compressors, EQ and reverb in one track FX.
Of course, the UAD Solo and fairly limited but for the price we pay for and to be somewhat widely achieve beautiful mix if you can handle the power of the card.
I seem to have used up to 21 plugs in a mix with a single card.
At DSU there are often updated, I'm v7.01 ... No particular problems.

Installation carefree, activation is done on the site in DSUs.
I do not have internet on the PC studio but just copy the activation of the installation gives you and go on their website links.
Then create an account if you do not have (it's required) and your account you can download the activation file.
Configuration is very simple just follow the instructions.
No problem of incompatibility for me with my P45 chipset ASUS motherboard.
For manual is in English but hey it will simply result in Google trad ... lol

I've had eight months and frankly I encourage fans to buy even if the price can sometimes slow ...
I know of no other model, I know they did that with Powercore but I do not really like the interface of the plug-ins (matter of taste)
The particularity of this card: CA SONNE!! Terrible! UAD is serious!
I bought the UAD De-Esser and the famous Cambridge! I love the quality is there ...
There are often specials in DSUs do not hesitate.
I intend to buy a second card for more power and choice I would do eyes closed ...

Universal Audio UAD-2 Solo
5
Universal quality audio plugs, EMT 140, the compressor Fairchild, the beautiful 1176. This is a real killer!
Really a great product, there is silence and there we collect!

Purchased in September 2010, working with since I use almost my plugs
SSL in waves. I rediscovered my mix, I'll have to buy much earlier.