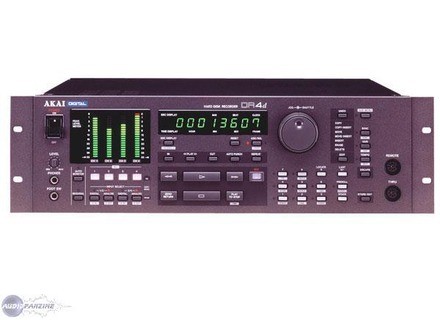 All user reviews of 5/5 for the Akai Professional DR4d

Direct-to-Disk system with real musical approach (editing and copy/paste facilities).
You'll be able to start working with it after only half an hour.

I regret that the unit has no anti-aliasing system and no band speed selector.

I bought it in 1994. I'm using it with a Sony 60ES DAT for backups, copying and mastering.

Pros: AD/DA converters and ease of use
Cons: No anti-aliasing.

I personally prefer version 3. Version 4 has too many virtual tracks that you have to manage with a pen in your hand... it's a good memory exercise!! Version 2 is too restrictive.

It's a standard.
Did you find this review helpful?yesno

Akai Professional DR4d
5
That says it all!
It should be noted even when a connector chaining in front if you had several DR4d has to work together, also a headphone jack, a jack for a pedal.
All connections with period while some would prfr XLR, it's not the 6.35 (4 in and 4 out).

Input and output possibilities of a switch with a 4 dB/-10dB manual switch on the rear (just a mediocre!)

Of saying that everything is simple, no! The buttons are 2 or 3 uses which can be a little boring. The mine is version 4.01 and I have autocolants on the facade that came with the upgrade ... short the top of the interface is not bad.

Note also that after a few hours become fairly clear aprentissage ca, if not logic, I still suffered a bit to my first Journe use.

The doc is pretty damned and going is essential.

We concentrate in the era of innovation with the best components of the market. The party DA / AD (card) is built on a set of specifications "audiophile". There trs particulires things as food dcouplage computer and audio, the limp has two power supply intgres in full conformity with the uses. The op amps are among the famous OPA2604ap Bur Brown and the converters are signs NPC and Asahi Kasei and also the famous Bur PCM69AP and Brown. SERIES Audio Capacitor Rubycon home. Resistors tantalum or a film or is it the mtallique stratgique ... brief is almost a frame so beautiful!

The sound is worth the effort! Signal to noise ratio does not exist, color Sound: moderate, dynamic superb for a 16-bit. It is very transparent and does not color the sound (measured on a spectrum analyzer)

It will ensure good levels of monitoring, because the dr4d limiter and does not like any camera A / D should be taken on to work with levels high enough to avoid conversion errors (dithering). There is no secret when you put the means we have about the results and everything is there.

There are a few spots is that the animal very hot (no fan in it), the PSE also quite heavy rack-made tle cans could suffer!
The mine has a firmware upgrade to 4.01 that access to the 250 virtual tracks and the equivalence Dr4vr. Regretfully, we must stick a set of stickers for the faade supplmentaires functions. It's not terrible at all!

I remake this choice, cest THE CONTROL IDAL for home studio models, considering the price it costs an occasion we can y'all eyes closed. Attention when the same SCSI hard drives with age become noisy and small capacity can be hard to find rvler trs nine.

In most but not least, los is inside does not crash ever, cest super reliable! lai I never saw a single plant and the trend continues in almost all users.