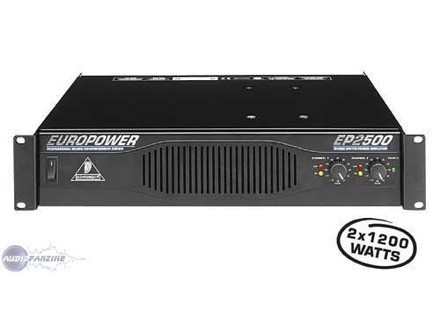 EP2500, Dual-Channel Power Amp from Behringer in the Europower series.

guizmo238's review (This content has been automatically translated from French)

Behringer EP2500
3
The have had a year and a half and I did not use more than 4 months!
very nice look, good quote on paper but no professional look on stage!
I roll with an old amp ab international and she is making my meillaur srvices behr made me!
I said because I made change to the monitor truht2031A
I think it overheated because it gave off a small metal ... grichhhhhhhh
with a lot of material behringer (Behring added unto .... lolll)
I was disappointed with this amp but ... BEHR may not have everything eh?
I do not advise a ququn who wants to use a full capacity but to use the medium ... to 250 or 300watts per side I would say ...
I give 5 in 10 gear! a lot anyway!
Did you find this review helpful?yesno

sam-peter's review (This content has been automatically translated from French)

Behringer EP2500
3
The opinions of the other using a toffe yours, I have this amp and uses spare tire to replace a Citronic c9, but not bone up on to lead the pair of low-medium ki are part of a rack of amps (peavey, crest audio, yamaha, Citronic) food for active filter. Nothing as testing (20 minutes) has full power to my conclusion here must k'il would sometimes babble and comments to be heated. for low-level but it is low.
Nothing is striking in the box but his appearance seems ki Pro. no great battles all land was taken with (him). But I have not mfiant roti filled with amps ki coils heat up and am not the restaurateur to operate ke bowls. Miss an evening is not possible so I prefer to use as backup or to animate accessories techno but not too technical for him to spit it is assumed k'il digr views the characteristics and power ad. Behringer but wanted to reassure his amp Dumoine the 2500 is far (I prsume) to provide. not against progress and am on is one of those behringer ke ki advance to give a hand to small grants.
Did you find this review helpful?yesno
Cookies help us improve performance, enhance user experience and deliver our services. By using our services, you agree to our use of cookies. Find out more.