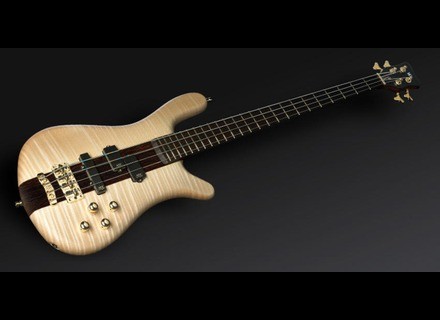 View other reviews for this product:
Handcrafted in Germany and consisting exclusively of elements Warwick and MEC.

Jym purchased from Music in 1993, honey-colored oiled. One of the first GIGBAG flexible (which were not yet known Rockbag) after that Warwick has decided to remove the large flight case heavy and bulky to make it an option.

Brass nut "just a nut" of the first generation with adjustable height of each string individually.

Mine is mounted with the D'addario drawing 45, 65, 80, 100 that confer a good balance to the whole. Although she supports 45.105, I found the game "hybrid" more flexible without having either the "noodle" under the fingers.

Nothing to say about the comfort to all levels except that when we use another bass, one senses how has the ergonomics of the SS1 is pure happiness.
Whether the profile of the handle (a kind of intermediary between JB and PB), body shape perfectly matching that of the bassist (AC could make jealous!), The weight very very reasonable, and mechanical controls that are all alone under the fingers, the simplicity of setting the bridge, I have yet to really find anything negative!
For sound, well again it is Warwick ... anything is possible and you just have to lean on but it is one of those instruments that sound regardless of the position of buttons!
Whether in the studio, repeats, live or otherwise ... it always happens to sculpt the sound to fit without having to touch the amp.
I recently equipped with a D-Tuner, which extends its scope of action.

As said before, all sounds are in this bebete and you just have to look a little. Mounting type PJ pickups allows about any of his big fat reggae to funk / slap to the brilliant Marcus. Pushing the preamp, it even manages to get a very saturated exploitable natural rock.
At one point I had a hesitation and had tested a bunch of microphones of various brands with or without electro active but I ended up returning to the base config is still the most versatile.
Coupled with my current or markbass samsanp with ID, it sounds like I want and whenever I want. It pierces the mix without problems and the recent "marriage" with the Markbass is perfect ... was wondering how to do better.
I must say that after 17 years, I am beginning to know her.
We frequently hear criticism of the choice of woods in Warwick ... knowing enough about the violin, I do not see what you can blame them. Maybe the price but for instruments of the "series" has a quality of manufacturing type luthier, Warwick is doing pretty good.

Contact and aesthetics of the wood is really nice, I never tire of admiring it again, even after all these years.
I have a bunch of other basses, mostly Fender, but I always come back to my SS1 is really going anywhere universal.
The only thing I had to change to "wear" is the jack. The frets show no sign of wear ... and yet it moves! The neck is starting to have signs of wear giving it a small distance "vintage". I very rarely treated with wax and color that comes with not moving. She also took some shots + / - violent but never shows weakness! She saw what!
The only criticism I could make is the color of golden hardware that I personally find a bit flashy ... if I had a choice, I took the chrome but it's more a matter of personal taste.
I would do the same choice without problems and am eyeing on the same 5-String ... the story continues.
See the source
Did you find this review helpful?yesno
Cookies help us improve performance, enhance user experience and deliver our services. By using our services, you agree to our use of cookies. Find out more.