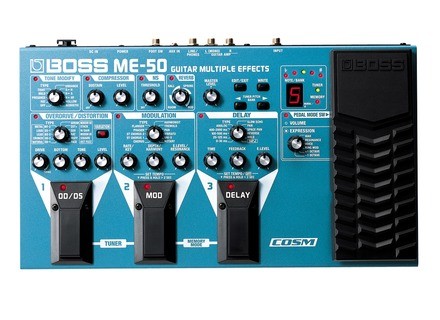 ME-50, Multi-Effects for Electric Guitar from Boss in the ME series.

Product replaced by the Boss ME-80.

View other reviews for this product:
Three pedals: a distortion / overdrive, modulation and delay
An expression pedal or volume
A sustainer / compressor (not great it adds a breath sound)
A noise reduction
10 micro emulation (the acoustics are a little bogus)
654686 knobs
Stereo output
It is done by plane from the Gulf War. Indestructible. Not unwind it, you have damage before it hurts.
It's big, blue. His pass (at least it's not like the colors in grimey Line6).
Missing is an auto-wah.
To buy a transformer 9V (10? Max).

It's mega simple to use over even though at first glance it looks like rocket launch pad.
For each class of effect (distortion / Overd, modulation, delay) is the same: the effect is programmed with the central knob, and adjusted the parameters (duration, speed, gain, etc ...) with three knobs from below. You can record 30 personal effects (3X10 banks).
The manual is standard, that is boring but they are the effect parameters factories. It's not bad to get a base effect changed thereafter.

While the effects ...
Bah There's good and bad.
The most common is modulation (chorus extra, flanger too). Having said that the tremolo is a bit sucks because it adds a breath and filthy in his phaser ... Oh yuck the phaser.En or it is not bad but it's triple the amount of base and it really meant, even with the volume knob for the effect to a minimum.
Otherwise nothing wrong side delay, it's clean, nickel, there's the choice of setting, in short, that happiness in a box ...
The compressor / sustainer is missed and is frankly bad, it gave the original to the whole, but there's always this foul breath in his ...
The noise reduction is effective it (use a big heavy distortion you see)
And the distortion is just .... bah means. Overdrive side is well done but for the next blueseurs Distos bah is very average (MT2 sound is awful, nothing to do with the original, super cold), it sounds bland, like Zoom or Digitech.
As for the simulations of microphones is generally well right Ormis effect "sound". If you intend to use it with a purpose made wahwah you leave in the open position to give clarity to the sound and micro scratches on the acute preferred)
The expression pedal is similar to a wah-wah (not great but easily controllable), a style effect Stockholm Syndrome Muse slamming good, and upper and lower octave (use it by harmonics is hell).
In short, it ... not bad but can do better

I use it for 6 months and having good aprivoiser the beast can be drawn cartains good side, while leaving other.
Modulations ok, but nickel delay distortion / overdrive to review. And drop the crap like vibrato or tremolo effect, it sounds box of corn promo ...
Pedal ok
I tried 2 hours in the store before buying it and I instantly captal nothing but the little I had before parraissait not bad.
The quality / made is correct without being sensible. (280E wholesale)
If it again, I would surely see in Korg they have neat stuff ... That said it's not a rotten pedal not eh, but it has more mouth than safe

Oh if there's a VERY VERY irritating fault: there is a latency between two EFFECTS OF SECOND HALF WHOLESALE. Imagine live.
See the source
Did you find this review helpful?yesno
Cookies help us improve performance, enhance user experience and deliver our services. By using our services, you agree to our use of cookies. Find out more.