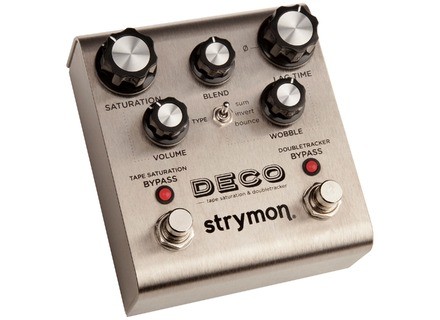 All user reviews for the Strymon Deco

Average Score:4.0(4/5 based on 1 review)
Audience: Advanced users Value For Money : Correct
Buy this productView price information >
Not satisfied with those reviews?
Our members also liked:
Buy at Amazon

Strymon Deco
4
The Strymon Deco aims at recreating the sound and effects of the tape recorders that were in use in the studios before the digital era.
I’ve used the Strymon on two ToneKing amps, the Imperial and Falcon – hence in stereo. These amp models recreate the sound of Fender BlackFace, Tweed or even Supro amps from the 50s-60s with an awesome clean sound that I use as a base for saturated/overdriven sounds and so on.
No loop for modulations – these are at the end of the chain and the big sound comes from stompboxes (including the Deco among others such as an OCD, Dyna Comp, Grey Faze and a 1981 TS808).
Guitarwise, I mostly use a Mexican Lacquer Stratocaster, a Duesenberg Starplayer TV Rebound, a ’56 Les Pauml Special clone by Tokai.
I mostly –but not exclusively– aim at vintage, bluesy, rock sounds.

The Deco’s brushed aluminium box is superb, it’s sturdy and definitely very beautiful.
Ergonomically, it’s good with many features, well-disposed controls which are pleasant to use.
The Blend control allows to balance the sound between both Stereo outputs, Lag Time controls the delay time, Wobble sets the detuning between the two outputs.
Saturation and Volume do what they say, Type allows to choose the kind of lag between the tape recorder’s heads.
A clear, printed quickstart guide including all features comes with the pedal, hence allowing to start using it even before reading the manual (which you’ll still eventually end up having to do, as usual with Strymon products). The back of the guide also explains lesser-used commands, showing a real effort by the manufacturer to make their product easy to use quickly while still packed with functionalities.
You’ll still have to spend a while on it to control the entire beast. The manufacturer’s site and videos provide good examples.

The Strymon Deco provides two separately-activable effect lines.
A saturation that recreates that of the preamp of a tape recorder: very progressive and soft, really useable in a home studio to get a crunch sound over a clean basic sound.
Time-based effects ranging from flanger to delay to doubler, chorus and slapback. These are subtle, very progressive and you get to the point where they remain on all the time, enhancing the sound without their presence being really remarked. Using a 90s Les Paul, you can quickly get Neil Young’s sound from the Dead Man OST: a Tweeb + the Deco’s saturation and delay set at 1 second and here’s the Wild West in your living room.
A Strat and the Deco in Flanger/doubleur/Chorus mode (there’s a narrow margin for settings) allows you to recreate the awesome clean sound from A Fool for your stockings by Mr Billy Gibbons on Deguello, or the brilliant and resounding riffs from Sultan of swing.
Actually, whenever you wonder “what’s that nice, light modulation on this clean guitar sound?” on a pre-digital recording, it was a tape recorder and the Deco really knows how to recreate this.

In a nutshell, this is a really well-built pedal and an absolutely beautiful one with rather unique effects. When the pedal is turned off, there definitely is something lacking in the sound. This pedal is more one to be used in a (home) studio than a tool for live. The stereo sound spatialization is both very subtle and great.
As for its cons, it’s still a bit pricey and the Lag setting is only useable in a rather narrow range, but that’s just a detail.