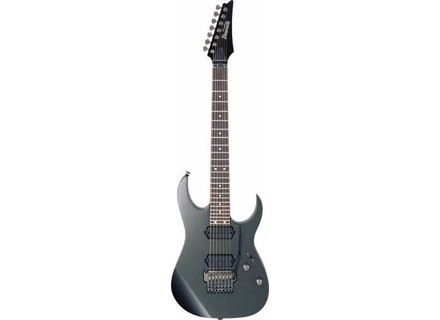 View other reviews for this product:
RG 1527 japan, 24 frets, two humbuckers Ibanez V77 (neck) and V87 (bridge)
Floyd Rose Edge Pro 7, 1 volume, 1 Tone 1 5-way switch.
Overall has for me, but I feel that the new ibanez Floyds are less efficient than the old ..

Flat handle, friendly and with a finish more than correct.
For me the access to acute does not differ more than has that of any other RG, JEM or universe.
for a 7-string it seems rather light and well balanced.

I play mostly metal stuff axs (dream theater, opeth, pantera ..)
I plugged into a peavey bandit 112 (a recent, not the one manufactured in the States), with a metal master digitech distortion and ultimately get a pretty heavy sound that is close enough that you can hear on train Thought of the dream (relatively guards of course).
The Ibanez pickups are correct without rock the house .. as bridge or neck position I like the ds intermediate positions as I think it lacks personality in the clear. all positions together I would say they lack a bit of precision.
I intend therefore to change the pickups pr something a little edgier.

I've had a few months and this is what I mainly play.
In the end I really like the handle, but I remain deu by floyd: it seems less accurate than models with most of Jem and universe, so I did not catch the interest of the system to block the small ring rope, as Floyd, as a - it's a hassle to properly block the rope, and 2 - it works very well without using it! I precise that even when floyd is very much in question in the agreement lasts.
on the other hand, it is on, its not the 7-string musicman petrucci (which, incidentally, has been dropped), but the fact remains that I love this scratching, and that 800 new I think I will buy it back.
See the source
Did you find this review helpful?yesno
Cookies help us improve performance, enhance user experience and deliver our services. By using our services, you agree to our use of cookies. Find out more.