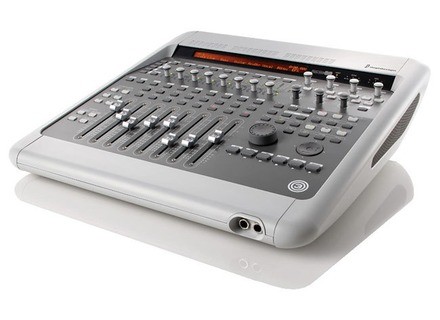 View other reviews for this product:
See specs

No DSP. Just a MIDI control surface and soundcard for Pro Tools.

Very easy setup: install the driver > connect. And you're done. I have never opened the manual, I learned by doing

The interface was conceived with Pro Tools in mind and it really improves the workflow. It complements perfectly the keyboard shortcuts. And the jog wheel to work with images is a big plus.

Some noise when I drive the preamps too hard, which is a bit problematic for me, since I do sound design.

I've been using it since 2011, it's my 3rd soundcard but the first at this price point, so I can't really compare it to other ones.

Which feature do you like the most / the least?
The most: It's the control interface for Pro Tools. You have everything within easy reach, automations and plug-ins can be controlled directly from the Digi, you gain a lot in terms of expressiveness and workflow.
What I like least are the drivers: They are not the most stable in the world (with my setup) and you can't use the outputs of the Digi with Pro Tools and other programs in parallel at the same time. I usually go back and forth between different programs so I'm forced to connect the headphones output of the Mac to inputs 7-8 of the soundcard (with all audio quality problems that entails).

With hindsight, I would surely buy a control interface for Pro Tools, but I would probably go for another soundcard.
Did you find this review helpful?yesno
Cookies help us improve performance, enhance user experience and deliver our services. By using our services, you agree to our use of cookies. Find out more.