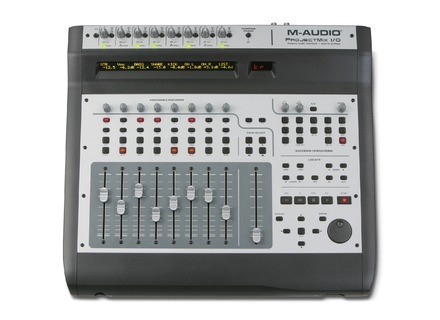 This control surface is a sort of all in one plug and record product. Once you install the drivers and plug in the firewire, it's ready to record. The synchronization between the faders and your DAW is awesome. When I first saw the faders moving on the projectmix while I was adjusting them on the computer I felt like I was in a sci-fi flick. It has phantom power, but it sends it to all the channels so you can't plug in a ribbon mic and a condenser at the same time. The midi input is nice because you can track virtual instruments and live instruments at the same time. Also, the two headphone outputs work really well. Most low end control surfaces have only one headphone output. It has enough inputs to track a drum kit, bass, guitar, keys, and vox. It's a spiffy beginners way to record a full band.

The sound is where this interface lacks in my opinion. It doesn't sound terrible but it also doesn't sound great. It's nice for home recordings and demos but I wouldn't release anything too close to your heart recorded on this machine. Firstly, the preamps are pretty bad. They don't have enough headroom to record really loud drums. With the gain rolled all of the way off on a dynamic mic, the signal can still clip. Not all of the time but every once in a while you'll hear a slight distortion. Also, on some of my condenser mics I would have to crank the gain all of the way up to record my sound source. When the preamps are cranked they get really noisy. This really affected me on vocals. I would have to sing uncomfortably loud because if I turned up the gain more it would give an unsettling hiss. Also, one of the preamps fried so my interface is now a 7 track/1track horrible hiss recorder.

This mixer helped me get a lot of experience recording. It was easy enough to just plug in and record whatever I wanted and it was also pretty portable. I wasn't super concerned with sound quality when I bought it and I got what I paid for. I don't regret buying it because I learned A LOT with this control surface. It made me a much better engineer and I produced a lot of home recording projects. Now that I have access to a more professional studio I don't use it as often but I still use it for some simple tracking. If I were to buy another product like this, I would go with the Focusrite Saffire Pro 40. It's cheaper, and it sounds better. The motorized faders and word-clock are cool on the projectmix, but I'd rather have a reliable, great sounding interface.
Did you find this review helpful?yesno
»

M-Audio ProjectMix I/O
4
This control surface and audio interface is a fireware based piece of hardware. It's compatible with ProTools M-Powered, Logic, Cubase, Ableton, Digital Performer, and other programs. It has eight XLR inputs and four 1/4&quot; inputs, and a front-panel instrument input. It has phantom power, nine touch-sensitive faders, eight rotary encoders, and a jog wheel. It has four analog outputs and two headphone outputs. There isn't much in the way of EQ's but it's more of a control for my pro tools setup anyway, so it doesn't really matter. It is also able to do almost every protools function, including automation, directly from the interface, which makes it much more convenient to use than a mouse!

The setup isn't too difficult with the manual. Getting it connected is easy. It takes a little bit of time to get everything up and running, but that is too be expected. Besides, it probably took me longer because I never had an interface quite like this before. Pretty much everything you'd need it to do in Pro Tools is pretty easy to figure out. It certainly made automation a lot easier. The manual explains pretty clearly how to use it in every capacity, so even if you aren't sure how to do something that well you can read the manual and probably be able to figure it out (assuming you know how to run whichever program you are using.)

The console doesn't have a particularly great, or even a very palpable sound to it. It is arguably pretty transparent. Once when I booted it up, it gave out a really loud shrieking signal, which was pretty painful and could have damaged my monitors. However, it was the only instance I've had of it for some reason. I don't particularly like the preamps or the EQs but I feel like I didn't really buy it for those things. I just needed an interface and I liked that it was also a control surface with faders. The preamps I use tend to be outboard and the EQs are usually plug-in. I've just had better luck with those.

I've had this console for over a year. I like that it's basically everything I would need for a home setup. I don't do any crazy tracking at home, I prefer to use a studio or larger consoles to record more instruments. I think that this was probably the best interface I looked at when making my decision. A friend of mine who engineers used it and recommended it to me. I trust his opinion and he didn't steer me wrong. The price is pretty fair. While by no means cheap, it's not a fortune, either. For the price, you get a lot of features and great performance out of it. I would certainly make the same choice if I had to do it again. For someone who really wants to get into engineering, this board will help you out tremendously, making you able to work with ProTools at home with much greater ease.
Did you find this review helpful?yesno
»

M-Audio ProjectMix I/O
5
The M-Audio Project Mix I/O is a firewire based audio interface as well as a digital control surface. You have eight pre amps and eight faders and virtual channel strips that you can control at once. It has both XLR and 1/4 inch inputs for the pre amps and also has MIDI connections. Since this an M-Audio interface, you can run this with Pro Tools M-Powered or any other digital audio software.

The configuration of the M-Audio Project Mix I/O is pretty straightforward, even though it provides you with a wealth of options and things to control. The typical functions are really easy to figure out how to use, and every thing is laid out smartly, so it is easy to follow. The manual is pretty helpful for this unit and I would recommend having it around when possible, as there are a lot of ins and outs on this that can get pretty in depth.

The sound quality of the pre amps in the M-Audio Project Mix I/O is about average. They aren't too thick and full sounding, but won't color your sound too much. The sound is clean, it just isn't as warm as pre amps that I would prefer to use. It doesn't have built in EQ, and can only control EQ and other effects virtually. Beyond the pre amps, there isn't too much to say about the sound quality as the rest just control different elements of your digital audio workstation.

I've been using the M-Audio Project Mix I/O on and off for about three years and I have come to the conclusion that it is a good audio interface for those who have M-Powered Pro Tools and small project studio owners. It is convenient to be able to run Pro Tools, but in itself it is good audio interface and a good digital control surface. The price is very reasonable, making it great for those who want to get into computer and digital recording, with or without Pro Tools. Overall, a great interface that has a lot of capabilities within itself.
Did you find this review helpful?yesno
»

M-Audio ProjectMix I/O
5
Honestly, there is nothing missing. In fact there is way more then you would expect. Blows away all the competition. Repeat: IT'S ALL THERE!

It is impossible for anyone to get confused, all the buttons light up, the faders are motorized, it's a dream. Plug in the powersupply (inline not a wallwart) and plug in the firewire. Cake.

The microphone pre's are what you would expect. You can't record a gold record, but its more then enough for any home studio. They are transparent which is fine by me. Besides that everything else is done in the box. It support digital in, lightpipe and world clock, so you can still use all your fancy equipment. Has 2 headphone mixes and they get loud enough for me, sound great on my hd265's.

It's 25 pounds. Solid as hell, makes a digi 002 feel cheap and for under half the price. I feel like I robbed somebody.

Take one look at it and you will be in love too. Best purchase I've ever made.

Originally posted on FutureProducers.com
Posted by: Ulterior (January 0-, 2005)
Did you find this review helpful?yesno
»
Read the 13 user reviews on the M-Audio ProjectMix I/O »