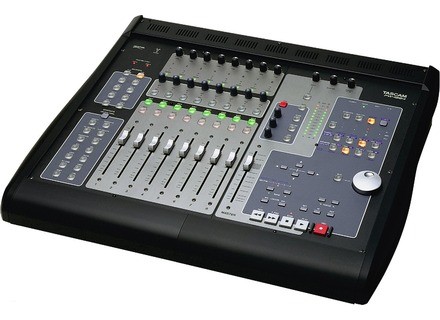 Does not map to Cubase SX except via Mackie Control Emulation, which is counter-productive at best. In use, the most important and useful control features of the 1884 are not mapped at all to SX (the EQ section for example), and the ones that ARE mapped via MCE are confusing to use.

Neither Tascam nor Steinberg seem motivated to do anything about this. Both the FW-1884 and Steinberg's SX are fine products, but trying to use them together has proved to be a bad choice compared to other options available in the marketplace.

Really good unit for the money, but don't try to use with Steinberg. As long as Tascam and Steinberg ignore the need for native support, consider that currently there are better products out there for this specific purpose.

Tascam FW-1884
5
Bought this beauty off Ebay New in box with warranty for $1198. I needed to replace an old, loud powered mixer I was using for recording along with replacing my audio/midi interface

Works flawlessly with Sonar 2.2XL. Automation is a breeze. What fun it is to see those faders flying!! LOL!! spdif inputs allow me to patch my Line6 Pod Pro XT straight in. ( My amp does not get used these days!) 4 Midi in/outs allow me to connect all my midi gear (Yamaha DGX500 keys, Zoom123 Drum machine, Yamaha SU-700 sampler & Yamaha TX81Z Sound module). Inserts on all channels allow me to patch my DOD S100,Behringer Ultraph EQ, Antares AVP-1 Vocal Producer and Aphex Aural exciter 103C on different channels. I can change my input signal to the channel already set up for the desired processing. Smooth linear volume control into my Event 20/20p Monitors. Sweet! Lots more to discover with this unit. Seems like the configurations are endless. Great Unit!

This unit was a little complicated for me at first, but I am, getting the hang of it. i am not sure I would advise it for a person's first interface unless you have some previous knowledge of mixing and computers.

I like going into my studio now to record. Before it was such a hassle to just get things set up, that I often just played around instead of actually recording. Now, everything is in it's place and ready to go with a flip of my ETA PL11 Power Strip. The Staggering Odds are hoping to produce a CD in the next year and never leave my studio!

It works seamlessly with Cubase via the Mackie Control protocol. It's important to understand how the mixer works: Monitor mix mode is to manage inputs, while Computer mode is for sequencer control.

DRIVERS v1.6 ARE NOT SIGNED SO THEY ARE NOT COMPATIBLE WITH VISTA 64 PRO unless you disable the driver check function that protects your PC! I already mentioned this to customer support but I didn't get an answer! This decreases the sound quality of your PC!

It's impossible to work seriously, but with XP it's great!

I also connected an MM6 to my PC via USB and two line outputs to the Tascam. I made the same thing with a Kore 2 and I also plugged a mic and inserted a Behringer 2024 effects processor.

Everything is perfect except for the driver problem...

Almost no noise, very clear sound except with extreme preamp settings, EQing directly in Cubase. I previously had an M-audio 2496 Audiophile sound card and a Soundcraft Compact 4 mixer. With the new setup all my songs sound different, the sound is richer and clearer! Very good sound for making demos.

I've been using for two weeks.

Once you got used to it, it's a very good product.

I bought it secondhand via Audiofanzine! Great value for money!

I wouldn't hesitate to buy it again.

But the Vista compatibility problem is not mentioned on the Tascam website. It's very disappointing and I can't use it with my new PC.
Did you find this review helpful?yesno
»

pentax's review (This content has been automatically translated from French)

Ben the top
Did you find this review helpful?yesno
»
Read the 16 user reviews on the Tascam FW-1884 »