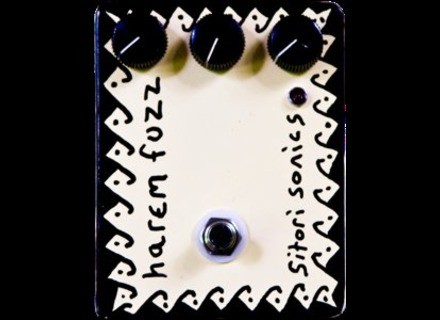 The configuration of the parameters found on the Sitori Sonics Harem Fuzz is uniform to most distortion and fuzz boxes out there. The three knobs it has are for controlling the fuzz level, tone, and volume, which are parameters more or less found on every fuzz, distortion and overdrive out there, so if you have used other pedals before, this will be super easy to use for you. Even if it were your first fuzz box, which is most likely not going to be the case, the Harem Fuzz is so simple that everyone should be able to use it easily without help from a manual.

I've been really impressed with the Sitori Sonics Harem Fuzz as a fuzz for applications of all types. I've only experimented with the pedal in the studio, using a Gibson Les Paul and Fender Twin Reverb amplifier. I like that it's possible to get both super heavy fuzz tones as well as a more well defined sound. It's still not the most versatile fuzz box out there, but still can get enough varying sounds to make it worthwhile. It's my kind of fuzz since it's not as overpowering as a lot of them out there, but still has a nice amount of grit.

If you're looking to cover all the bases in your search for a fuzz box, check out the Sitori Sonics Harem Fuzz. You can buy it on Sitori's website, but I don't know how you would try it out before hand if you just wanted to get a feel for it. It's definitely a cool pedal to have around, but I'm not sure it would be my first choice for a fuzz box, although it's worth noting how many great ones there are out there...
Did you find this review helpful?yesno
»