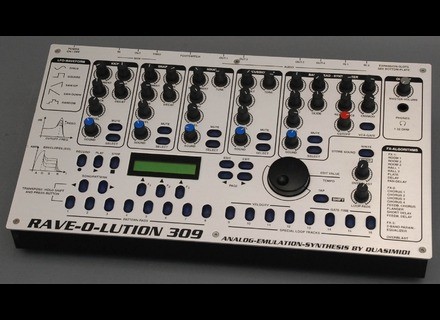 View other reviews for this product:
This little monster is one of drle groovebox ... I bought a spar APRS m'tre MC505. Frankly lass sounds Roland. T and a slap in size. If the sound is Amricain trs emblmatique House and the prods usual techno sound German does exist and is mainly devoted to scnes Acid, Jungle and bigbeat.

First used on the outputs Stros, I broke down and I have been using it with a small console and dedicates it became quickly the nerve center of my home studio with its large SIRIUS cousin.
Sirius is the master and the 309 reoit information for tempo and other sysex. I remain to the Sirius to play in real time and a little program for windows me permt custom settings to control all of the 309 line.

To return to the Rave-o-lution, it has the three extensions: spares outlets, 2 bass lines and percussion. The 309 is the prmix complt of two dynamics processors (compressor DBX 160, BSS DPR-944) and a filter Electrix Filter Factory Pro pilot at noon. Everything is mix of 4 tracks and only the kick and hi-hat are filters. The bass is playing on Sirius or a Kurzweil K2000.
The programs are on squence squenceurs 2 (the Sirius sends the start and 309 below).

internal effects are not very efficient and I have to beg them with an old Ensoniq DP4 +. The German and shuffled grain is quite amricains russi.

Grate to the songs, I use the recording in real time of squence and controllers on the PC with Pro4 ACID or Cubase SX. This will be in the Sirius rinject for use live.
This allows me to work in three phases:
1 / programming patterns on both (309 + Sirius)
2 / MIDI recording on cubase and machines to the dump
3 / audio recording of the Samplitude and play "live" on keyboards and screens.

This machine is as easy as mastering it is impressive. It is far from the Groovebox, and the free distance for paramtrer gnial enough.

Many Controller rel time on the surface of a CONTRL can pick up and play live fast trs. Everything is logical and trsractif.

The manual does not open once, to understand how to save a pattern and a song. that's all.

Acid sounds, powerful filters ... is empty the machine is made for electronic music. But compounds Jazz lectroac 't have couraging and shuffled with enough purpose. Remains the difficulty of mixing properly.

Sounds only chemical but some do well or even percussion "ralistes".

Mixed effects. To be used sparingly.

All Ragit quarter of hair! A joy to play ...

Sounds can be slightly modified but remain adequate in the state. A little better than a groovebox ...

It's been 6 months I'm on it every day and I spare the second (h yes, I have two ...)
but with some good synths, the sound is to go.
Its sync with the Sirius makes a bte for scne.
I do not regret the vacu MC505, the 309 certainly has less features (for a piece on it with nothing else, it's pretty dificil) but the sound is much more powerful.

On occasion, the 309 is unbeatable, around 500 euros for a full version of options and instructions in French ...

I do not count me Spar sitt! Lment is a highlight of my studio, irreplaceable for many and PCHE sounds is vital in my compositions.
See the source
Did you find this review helpful?yesno