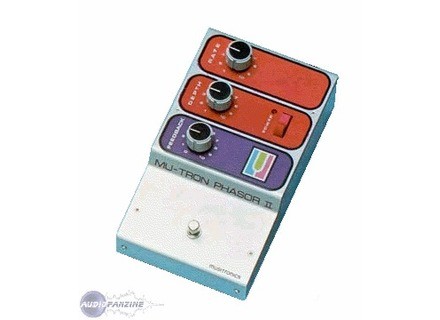 Musitronics Corp. Mu-Tron Phasor II
5
The Phasor II Submitted pedals like a big, fully analog, look at seventies (he made from 72 t 79) with a toggle button on / off (in red on the photo above) which has a particularity: in off, it cuts the signal from the guitar or any instrument connected to it. The machine also has a foot switch, like other pedals, which enables or not the effect. Finally, to rglages rsument three knobs: feedback, depth and rate. In indoor, the circuit sacrment complex appears to be completely done by hand. At the rear: one input and one output jack. Mine, like many, is the United States. I connect to a voltage converter 220 -> 110. He does not accept 9v battery.

The edition of the sounds is his strong point. It produces effects phaser and complements twisted crazy by pushing to its limits. It is, sr, able to get out of phasers trs soft and subtle.

Oh the sound! A wonderful, organic, teeming. For his age, the pedals produces no breath. The grain of the guitar is respected. Gnral sound gains in warmth and transparency. The Phasor II rput for its effects trs slow scanning are falling, and often more useful for the synth guitars, as a general rule. As such, an address: http://www.modezero.com/gallery3.htm

=> Add more: the sound quality is largely due to the power that getting the pedals: a power supply symtrique (+ /-12V). But this is the best fawn to feed AMP (RC4558 of the CI's Phasor II), if we want prserver a high signal quality.

For me, the best phaser ever built. It's been three years since prs I possde. A ct of 80 Small stone's Electro-Harmonix, I know perfectly well, is compltement Exceeds. Besides, every time I hear a phasing effect that catches my ear on a piece of reggae (Groundation, etc.). Or funk of the 80s, I think it's him. He used t trs in both genres and still is today normment. A possder emergency. Dsormais I would get hold of a Mu-Tron III.

The one I choppée there is more than a year now is 220.

For a foot skyscraper is unheard of for me.
Not a pet of breath, it serves both as an insert on the mixing desk for my DAW behind other effects or synths / samplers virtual ever on guitar.
I insert it behind a tape echo feedback in that part, it's sacred to tweak the two modulations.

It crops the acute but what a sound! In the long sweep ptites Mutronées bubbles with fairly high rate. The sound is silky, deep, never hard.
Slightly used with little feedback or depth it is also interesting:
I'm on rhythmic sweeps of light but now that give the body, movement to the sound. Try it.

It is not given, but of excellent sound quality and construction.

Other Musitronics Corp. phasers for Guitar