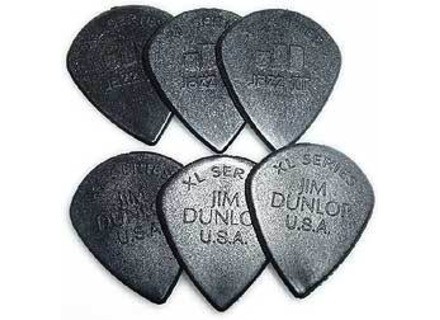 Dunlop Jazz III XL Series
5
For the longest time I have tried to get use to the popular Jazz III pick. All my buddies use them and are always telling me is the best pick out there. I have used them on and off and always come away not liking them much. My biggest problem with them was the size. With the small size of the Jazz III I always felt them turning around in my hand and dropping them. I am use to bigger picks like the Dunlop Gator Grip 2mm. The Gator Grip also has a non slip surface which is similar to sand paper. The Jazz III”s are pretty smooth with just raised lettering to give traction. My friend told me if you do not like the Jazz III's because of their size you should try the Jazz III XL picks. I spent some time searching for them and was finally able to get my hands on some. There are some immediate differences with the XL and the Jazz III. With the larger size they seem to be slightly floppier. They are the same thickness as the small Jazz 3 so with the same thickness and around a larger size there is less hardness. They are obviously bigger. The raised text on them is different so it provides more grip on my fingers. The raised lettering is of a different style than on the normal Jazz III picks and they give more grip than the normal small Jazz III's raised lettering does. They are still super sharp like normal Jazz III's so you get that crisp bite on the strings with them. If you are like me and the Jazz III pick was too small for you Dunlop has made a larger version which will fit you perfectly. This pick is very good and I would recommend it to people who like large picks but want a sharp small pick sound.
Did you find this review helpful?yesno
»

Joe-Rhys's review (This content has been automatically translated from French)" I finally found my pick!"

Dunlop Jazz III XL Series
5
I bought there over a month and I'm happy!
Finally, a pick I do not scrap because it is not sharp enough or else ...
it fits nicely in my hand, it wears very slowly and it is red, so easy to spot in my mess! ah! ah!
I think I paid € 1 or less, I do not know ....
Anyway, I finally found a pick up to my needs!
and here, it is not nothing!
Did you find this review helpful?yesno
»

Dunlop Jazz III XL Series
5
Comfortable to hold, does not slip. Aggressive, powerful and versatile. A "plus" in the attacks. Do not wear out quickly. Great for the rock and its derivatives despite its name.
Did you find this review helpful?yesno
»

mrsandman's review (This content has been automatically translated from French)

Dunlop Jazz III XL Series
5
Well it's been great to see other fans of the Jazz III XL SERIES! It's really an exellent mdiator, trs prcis thanks to its advanced and very easy to take in hand as it is wide (and not thick at last its thickness is 1.38 mm). Its been years since I am a fan and I'm tired of not prs (I just ordered 24 on ebay !!!). Unfortunately it is difficult to find trs in the ds trade, while you see it chop-full!

Did you find this review helpful?yesno
»
Read the 5 user reviews on the Dunlop Jazz III XL Series »