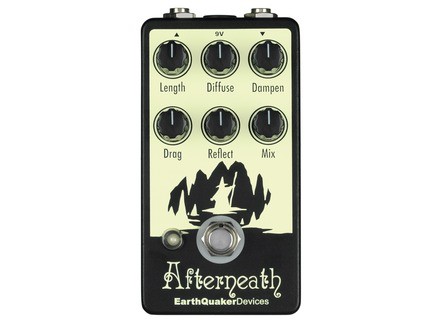 All user reviews for the EarthQuaker Devices Afterneath

A pedal made in the USA (Ohio), analog-made but producing a rather digital-sounding effect - not a 1960s-type analog effect for surf music, old-school rock, it's clearly not its thing. It's better suited for 90s rock, post rock, metal, electro, pop, trip-pop, post-jazz, 80s progressive rock (in the likes of Genesis, most recent Paul Weller works, or Pink Floyd or David Gilmour albums).
I'll also add that this pedal mostly addresses composers and people who like to experiment with sounds, it could also suit cover musicians but it'll only be useful once in a while for the right song. Paradoxically, it's not a versatile reverb but it offers several sound possibilities, all solid, abstract, concrete provided - you keep within the range of the aforementioned styles. Finally, regarding its design is clearly inspired by the "Lord of the Rings" trilogy (it represents the shadow of Gandalf, the wizard). Soundwise, there's a bit of it too with a cinematic ambiance evoking subterreans, cave echos, digital sound yet quite natural.

I play Post-Rock with a Folk leaning, and this stompbox allows me to create reverb "pads", for that's really what it's about, so as to create an ambiance while playing live. It's up to par with a studio professional effect, clear but without sounding cold or surgical. It's very versatile on stage and in rehearsal, and sturdy too, physically impressive yet compact on a pedalboard for stage use. This pedal recreates perfectly the reverb sounds of bands like RADIOHEAD or MORCHEEBA. For 60s psychedelic sounds, look somewhere else: this one is clearly modern - yet not cold. I use it with the modeling of a 70s cchoplex and both work wonder together, the resulting sonic effect is huge, spacey, progressive, with a lot of sound artefacts making it to the amp, colonizing the whole stage. It's a real echo/reverb box with tons of possibilities, such as all you'll find in the most famous studios or in Pro tools. It's an adventurer's pedal, aimed at someone who wants to create his own playing style, it can be coupled with chorus, delays, fuzz, modelized preamps, overdrives... In a nutshell, it opens the door to many possibilities. It takes a lot of tweaking before finding your sound, but however you tweak the result always is great (and just in case there's Youtube). It's real "plug & play", you turn the knobs and it works, you create things, so it's great as long as you like to create sounds in a modern register. As far as I'm concerned, I found at least 13 different absolutely great setting combinations which I use daily, but I believe the potential is infinite. I play on a Rickenbacker (330 and 660 with 10/48 GHS GILMOUR strings), and an old DEARMOND Jazz X135 (with 11/52 ERNIEBALL strings), on a Fender Princeton reverb 65’ amp, with Monster cables. Effectwise I only use a modeled exchoplex and my amp's reverb. The reverb reinforces the pedal's effect, making it even more spacey. It's all plugged directly in the front, I have no effect loop.

I won't spend much time on it as it has to be tried before buying, but these are high quality simulated reverb "pads", nothing sounds rough on this pedal, it's all clear yet neither cold or surgical. Comapred with BOSS's Space echo or reverb pedals (such as the TERRA ECHO), it's less recognizable, you wouldn't say "hey, that's an earthquacker" upon hearing it, but in the same time it's very different from what is produced by specialized manufacturers like STRYMON or EVENTIDE. Originality comes first here: to be tried.


4. Overall :
+ : Quality of components, all-analog, well-built, entirely made in the USA. Everything is well assembled on mine, solderings are well executed, a "real brand", a great pedal.
+ : Sturdiness: a real tank, yet not too heavy.
+ : The effect (or effects, as you prefer): beautiful, realistic, rich-sounding, totally usable at all levels, from the most concrete sounds to the highest level of abstractness.
+ : The pedal's design, especially for Lord of the Rings fans. As for me, I find it nice, and very evocative of something damp, huge, ambiant.
+ : Allows to experiment a lot without imitating such or such artist's sound, although some sounds resemble RADIOHEAD they're close but not exactly RADIOHEAD's sound, or MORCHEEBA, or PINK FLOYD... It's also something nice for a composer.

-: the pedal compresses, slightly, yet doesn't crush the signal, but a lot of modeled reverbs do the same.
-: not versatile. Unusable for old-school rock, or blues, or country unless you're definitely not after a 1960s sound and want to stay with more modern tones.

Value for money is average, such devices are expensive but no pain, no gain - even for music. On the other hand, it really takes trying before buying, it's all or nothing, it's a real fellow traveler to me, just as if I brought my small studio with me - I love it! I give it the highest grade, everything about it is high-quality, yet BEWARE it's not versatile, try it before you buy.
View price information
Did you find this review helpful?yesno
Cookies help us improve performance, enhance user experience and deliver our services. By using our services, you agree to our use of cookies. Find out more.