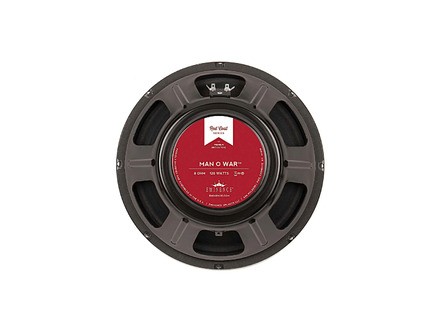 Eminence Man O War
5
I have this HP from 2-3 years, it complements other Eminence that I like: the Governor and Canabis Rex.
As often in the brand, the yield is high (101.6 db, slightly less than Governor)) and can make the most of the heads or combos low power found increasingly in recent years. But of course, HP does wonders on muscular amps.
For my part, I particularly appreciate the complement HP mounted on a Fender Hot Rod Deluxe combo or Supersonic. I installed in a cabinet Palmer, the quality / price ratio.
It has a fairly homogenous sound very appreciable color rendering and exemplary articulation. Its color is English style (it is part of the Redcoat range) quite modern, ie not dark but rather with a slight bump in the treble. But unlike a Celestion Vintage 30, for example, his mediums are neither planned nor acids which gives it a much better homogeneity and greater distinction in the overall record. Even new, it already gives a lot of satisfaction.
The size of the magnet due to the fairly substantial weight 4kg5.
Excellent HP US-made, which is around € 110.