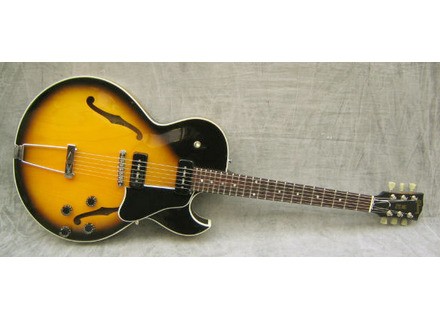 View other reviews for this product:
The Gibson ES-135 is beautiful, semi-hollow body electric guitar. These guitars are no longer being made, but I was lucky enough to try one out when I friend got a deal on a used one. The guitar has two P-100 humbucker pick ups, along with a pick up selector and tone and volume knobs for each, so you're getting a decent amount of versatility here right off the bat...

Playing the Gibson ES-135 shouldn't present any issues to anyone! In my opinion at least it has an absolutely beautiful neck with a great feel. I felt like I could play just about anything on this guitar, whether it be a simple chord progression or a tough lead part way up on the neck. The body and shape of the guitar is somewhat similar to the classic ES-335, but where the neck meets the body it has a single cutaway. Getting a good sound is again a very easy task...

For the brief time that I used the Gibson ES-135, I was playing through a Fender Hot Rod Deville guitar amp with no effects pedals. What I found was a very versatile guitar in terms of what I could do with it right inside of the box. Like the 335, you can get both hollow body type sounds as well as solid body, thicker sounds. It is the type of guitar that will simply excel in any situation that you put it in, regardless of if this will be on the stage or in the studio for you.

Although they stopped making the Gibson ES-135 within the last decade, there are still a lot of them floating around there if you want to get your hands on one. When compared to the ES-335 (which seems like the most likely comparison), it should be able to be obtained for a good amount less. The Gibson ES-135 is simply a beautiful instrument that I don't think too many would mind having around!
Did you find this review helpful?yesno