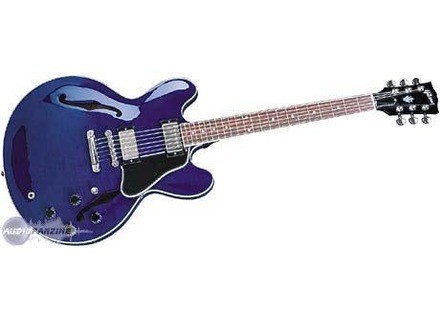 View other reviews for this product:
ES-335 Dot Reissue
A repetition US so.

Hardware: the classic Gibson.
Wood and violin: it's Gibson, then 22 frets and mahogany set neck. The guitar is solid wood, plywood, but stocky, like all the guitars of this type. The guitar is hollow but is a cross beam in the Saddle microphones. This stiffens the table to avoid feedback, and makes it a little less flexible. The table of my 335 is fine with trs Saddle ond (which was not done before). At colors, made in the Sunburst - like mine - in the natural or red - the Chuck Berry. Black is for Lucille, the other colors, it's for the mickeys
Electronics: So it's two double Gibson (of '57, powerful enough, not and split), two volumes, two tones, an inverter and basta.

Note, I have the version with the ugly brown tui indoor pink "Barbie" ... Beuark. The new models are in black tuis indoor black. Apart from a, the tui is solid (it's Gibson, but you would have guessed right?)

9 because of the tui chestnuts.

Channel between the TRS round of the 50 LP's and the end of the SG. A good compromise. Large enough, it seems, trs enjoyable play. Glide on the back of the neck, despite a veneer that could be bright enough to fear the opposite.
Access in acute MODEL of its kind, the heel is well done.

Weight and size enough consquent despite the fact that the guitar is hollow (the beam Saddle certainly). It's a big guitar. A small deprecated templates.
The sound is easy shape but still within the limits of the Gibson, so much to this CHARACTERISTICS microphones, wood and violin making.

8 / 10 only because I do not like the location of the jack: jack from the right angle of the box. Although this is the MODEL Fidler home and a kind of icon espce respect, I have always found this site n'tait not practical and could be dangerous if bad manipulation. Well that's quibbling, eh ...

Size sound for blues, jazz, pop, whatever you want, the same standard, as we seek a stay in the Gibson type. You will never have a lgret Start with this guitar.

I have yet to exploit all but here's Premire DJ impressions.

In clean sounds, the sharp slap micro well, the microphone allows serious beautiful blues.
If you pull into the crunch, has went well too, though wrong when you put your intention.
To the large saturation: the high saturation makes beautiful, the grave opens the large rhythmic (the '57 pickups seem to have a fairly high output level, which would a priori styles moves away from the guitar program ). That said, as the large saturation is not my area, I will not comment further.

Contrary to other models of Gibson, the tones are used throughout their course, allowing a large variety of sounds with the help of the inverter.

Note that even when a relative LP, the sound is really dry.
Euuuhh to the sounds of classical music, c'tait a joke ...

I have for over a year, and I can not get enough.
It's not a guitar for beginners: it is what a guitarist can look APRS few years on other models.
Since I have, I almost out of his Les Paul over the tui.

MODEL is a mythical APRS is all the guitar of Chuck Berry. I still work out at Duck Walk and everything will be perfect

The sound is mallable, but remains in the guns' Gibsonian ". In a good amp lamp was wrong as it should, just enough. The sound remains clean, even a little dry, I like.

I tried a lot of MODELS, 335 but the look is unique, we like it or hate it. I did not like me at beginners. And then you get older, everything is done less kakou, and start apprcier beautiful forms perfectly round. It's like a, that's life, you end up liking the look baby-blues! Too bad, I assume.

-------
Other options in this type of guitar: the Gibson Lucille, trs trs well as all the guitars and drives.
Note, currently out with a Gibson ES-333 version which is "cheap" (€ 1,500 even when it is the "cheap" seen by Gibson) of the ES-335. A try for those who are less attentive COD.
The piphone Sheraton II is not bad, but the microphones are only acceptable if it does not Gibson in comparison. The really they admit their weakness. But when beautiful violin even though the table is trs trs steep. In contrast, in Epihone again, I strongly deprecated 335: I tried 3, does not believe. I may be unlucky.

ES-335
See the source
Did you find this review helpful?yesno
Cookies help us improve performance, enhance user experience and deliver our services. By using our services, you agree to our use of cookies. Find out more.