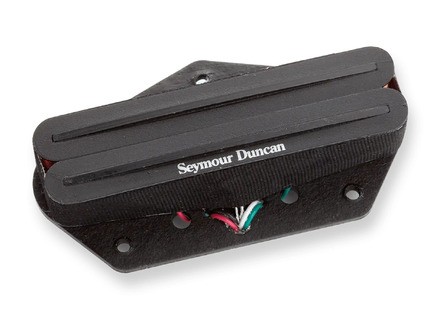 Buy this productView price information >
View other reviews for this product:
I recently installed this micro in the bridge position on my Fender Highway One Telecaster with a push / pull.
I have not really tried other models before I do ask, I relied on what I've read on the internet and listen to it on youtube, I admit it was risky ..! But I do not regret my choice!
I admit that the first time I tried it on my Telecaster I was a bit mixed but I realized that it was because I was too used to the original sound that was already very good . The problem was that the sound was too rich acute and not full enough for my taste, that has the Hot Rail correct. Less acute, a fatter and filled (micro double logic) and even heavier, which was not easy because the original was a micro level output 14K for a simple as you say it hard!
What I like most is the power of the microwave, it takes a heavy sound without being too typical metal nag, and yet I find it quite versatile! I tested well on my Blackstar HT 50 all-tube, and frankly it sounds! The push / pull is a big plus, you can find a Telecaster sound, not as good as the original microphone but hey, you can have a really nice clean!
Another thing I appreciate is the fact that the guitar has not lost its soul! I read with this kind of micro should no longer be considered as a telecaster our guitar, but I disagree, I think it has kept its characteristics but with a big sound! Moreover split, the sound is typical telecaster!
What I like least, it's no big thing made, perhaps the fact that the sound that is neither a double nor a simple .. it is almost but not quite a double Absolutely! lol
In conclusion, a good microphone is a good upgrade for those who want a fuller sound and more aggressive. This mic gives the opportunity to play a lot of different style and not so expensive (more or less 80 €)!
See the source
Did you find this review helpful?yesno
Cookies help us improve performance, enhance user experience and deliver our services. By using our services, you agree to our use of cookies. Find out more.