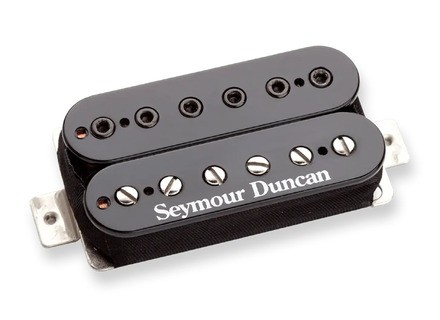 Nordin's review (This content has been automatically translated from French)

Seymour Duncan SH-12 George Lynch Screamin' Demon
5
Hi All, micro George Lynch is extraordinary for the guitar solos, he set up in the Top trs harmonic frequencies.
This micro grain that resembles a Jeff Beck SH 4, but brighter.

Trs something important, you must mount the microphone on a guitar with a violin Hot Trs: Mahogany or Korina kind, Basswood, because if you mount it on a guitar like crystalline trs stratocaster alder and neck stocky, and your exact sound will be loud.

So we must take into account your Lutherie to get the best sound with the microphone.
In this microphone has a clean sound that the microphone raproche EMG 81, and for arpge the sound is great.

Triamp's review (This content has been automatically translated from French)

I love everything !!!!!
I mounted my Strat US; I had never heard before this mic, I just trusted my luthier ... and I was right. I wanted a microphone that had potatoes, but without compressing my sound like a pig (not like Di Marzio Evolution yuk yuk).
This is the rve, a pure sound, full of dynamic (in my branch Hughes and Kettner Triamp 2, that helps too).
I really control my sound, I did what I want, the ultimate lightweight crunch the distortion without affecting the volume of the guitar or the amp, just by changing my attack .. . happiness I tell you!
Harmonics are trs fine, I go to the big rhythmic solos without any concern .... I would put on all my guitars!

correct, or several cheap or cheaper than other Seymour

Seymour Duncan SH-12 George Lynch Screamin' Demon
5
I use this mic a ESP 901 (Bolt stocky, rosewood fingerboard, mahogany body and table SLAR) for some years now. With an output level lower (but sufficient for dcoller tapestry) that all its competitors that eat up saturax super sound, Lynch is a fabulous micro cruncher who knows with great body and density with the dynamic gain saturation, nuances in the game according to the attack. The sound is clear ... trs clear will for intros with the volume down. Small point: I had plugged in for some serious time, and the slap! Super bang with grain and body.
In short, it, as Seymour says truthfully, a bang with a little something extra that hard in the treble, nice beefy bass well and especially mdiums pretty good singing, all very dynamic.
Yes, I am extremely pleased with this mic, I no hsiter Rasht. Warning, this is not a micro net ultra cramique, such emg81 it rclame the game and the shade, even mchamment rock. Make no mistake! And then, I play a bit like George Lynch. (The first who made a remark, is a ch ..)
Hello.

Adri02's review (This content has been automatically translated from French)

Seymour Duncan SH-12 George Lynch Screamin' Demon
5
- How long have you use it?

There are now two months that my luthier I installed it and split.

Most? Sound distortion is to cry means everything! We are far sounds mega compressed Bouillabaise musical personally I can not stand. It's very rock, punchy without losing the dynamics and the attack (attack very specific ). My les paul studio saw through this micro (with the Jazz in the neck Seymour Duncan who has not in fact jazz sound).

The clean is pretty great, but needs to be enhanced by a good amp (I recommend engl, personally). Very warm and hovering, a pleasure to play small arpeggios above. Sound distortion is much more versatile than the clean. But hey, everyone knows that a good clean and distortion is rare ...

Watch out for novices: This microphone is ultra powerful. This means that if you have been advised and that the first hearing, you are disappointed, do not hesitate to go down or up position, it can freely change everything (I have not really appreciated at the beginning ... a millimeter lower and that's it).

The only downside is its high harmonics that break the ears from the moment you play the strings and so mi ... I do not know yet if it's due to my les paul studio, which is still the lowest end of the series. In any case they are measured with the micro, so I have to play with his position and the EQ of the amp to stifle.

No, I heard that gave Di Marzio and EMG, but I'm not convinced. The sound is too metal type and not enough for my taste hovering.

Very very good! This mic is really worth the trouble, it is full of sound qualities and frankly 100 euros is not rocket science to have a sound so authentic.

I think I have boosted up the sound of my Les Paul with this mic, but it is not enough ... Maybe I should look to other horizons guitarist, but I do not believe that another micro is the solution. So yes I would do this choice.
UPDATE 18/07/08:

I was relatively inexperienced when I got this microphone and I did not really say what was different or not. Moreover, I had used on the wrong amp. Here is a little reformatting my opinion:

- The microphone is not "ultra powerful" under "Output volume" nothing to do with such a sh ... 6 But he brings a saturated colorful and really friendly, but the death of friends will not find their account, that's a fact.

- Look at the tone chart on the website of seymour duncan: he still 9 in acute ... It's not for nothing. It is really filtered into the hi mids, and a lack of fairly low but it's personal I do not mind, it gives more bite to the lead, more attack and a more incisive. Not bad for the solos, even if it is not my specialty.

- However, it is clear that the distortion is really clear, nothing to do with other pickups that give a more draft. Moreover it is precisely what the les paul was missing.

- In crunch is frankly terrible as well, it does not lose its aggressiveness and the clean is not his strong point (as many bridge) while it is relatively flatter than the others ... There is still a bit "gretsch" in the soul, and that this heavy me

I have never had any other microphones with my les paul but it is much better than the 498. So I could not really make a comparison because I only acted on the basis of advice from my luthier. He advised me fairly well but if I had the choice again, I inquired better before. Other microphones tempt me in SD, as "full shred" or "distortion" ...