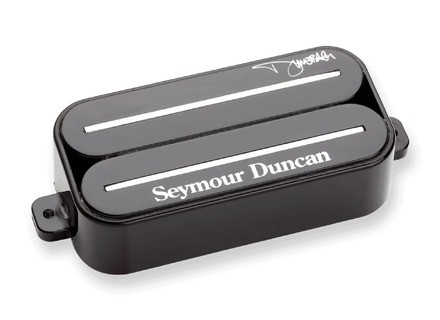 Seymour Duncan SH-13 Dimebucker
4
I got this in a Dean Dime O Flame. Based off of Dime's L500XL, whether it was the B&B or the BLUSA isn't known and doesn't really matter, they're incredibly close. There's rumors it was based off a custom L500XXL made just for him but that's not a proven fact. This is a very bright pickup, which happens to be it's #1 complain. A simple 250k pot swap will smooth out those highs and make this pickup sing. Designed to be used in a full mahogany guitar which is pretty dark, so if you put it in an already bright strat style guitar what else would you expect? This pickup isn't bad in any sense but it wasn't as tight or clean as the B&B L500XL. It has higher gain and IMO a bit too much. It is a little fuzzy for that reason, they needed to take off a few winding's to calm it down a bit. Like the L500 this pickup is very clear. Listen to some Pantera to get an idea of how articulate these are. He used the L500 during Pantera but they’re so similar you’ll get the idea. Along with the articulation these have a very smooth razor like sound. It’s not thick but it’s not thin either, it just makes staccato playing effortless, cause it wants to be tight anyways.

Again this is definitely not a bad pickup but for what it is (a L500XL copy) I don't see the point is spending another $30 for the words "seymour duncan" and Dime's signature on it. I'd rather just buy the REAL thing for $50 and have very slightly better tone. There’s a huge debate over B&B vs BLUSA, I don’t buy into it at all. They both make great pickups and are close enough in tone that no one should ever care. I guarantee no one would be able to tell which is which in a blind test, without getting lucky. There’s a youtube video floating around that compared the B&B, BLUSA, and the Dimebucker, all in the same guitar. I suggest you check it out.

Seymour Duncan SH-13 Dimebucker
4
i got this pickup at Sam Ash for $84.

this is an awesome pickup. Great high end, nice and bright, and loud. When i got this put in, i had to turn my amp down!

not much, it does tend to be a bit to noisy, sometimes when i take my finger of a note to make it stop, it just keeps on sounding. But i do have a crappy amp.

it's a pretty sweet looking pickup, it's seymour duncan, so it's good quality. I totally got what i paid for

great lead pickup, one of the best out there

madchap's review (This content has been automatically translated from French)" good microphone (but not versatile!)"

Seymour Duncan SH-13 Dimebucker
5
it makes a Ten members of this year that i mounted on an old SH13 Lag hardmaster and it is just great for metal. It is a microphone that has a response curve made for serious ... its too important not ask him to do the blues is not his thing ... so if you play metal (extreme or not) or very large heavy, it is a perfect otherwise it may disappoint.

in clean, it is quite suitable for funk, because it has sharp enough net and slamming.
large output level too so if your clean channel crunch quickly ca can be embarrassing.

considering that it is dedicated to a micro metal ... it is perfect ... for metal!
I would recommend it to people who have dedicated or several guitars guitars, if it going ben restrict the styles you can play with your guitar ... a ... the metal! ah ah! \ M /

Fredtron's review (This content has been automatically translated from French)

Seymour Duncan SH-13 Dimebucker
4
The dimebucker is a high output microphone.
It is coupled on an old Lag Rockline 1991 with a Duncan distortion in a serious and DiMarzio virtual vintage solo in the middle.
The sound of one dime only be used in distortion because it sends STRID the treble level. In the light I use to split coupled ks for crystal clear sound. It is standard in distortion, the sound is good trs Dfine, harmonics are excellent and it gives quite a punch compared to the duncan distortion. It allows to make powerful rhythmic extremment powerchords.
Only problem, the dime is serious polyphony, but it's a humbucker so it remains all the same silent.

Did you find this review helpful?yesno
»
Read the 20 user reviews on the Seymour Duncan SH-13 Dimebucker »