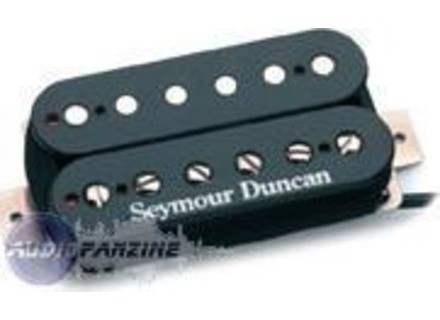 Buy this productView price information >
View other reviews for this product:
The Seymour Duncan JB Pick-up is a mainstay in rock since they designed the prototype for Jeff Beck in 1974. I recently bought a Charvel San Dimas that came stock with a JB so I gave it a shot. It has a really good mid grind to it so I can see why it was a great 70s and 80s pick up for sure. Plays classic rock tones perfectly with no issues. I think whether it is perfectly balanced or not will depend on what kind of music you choose to play with it. Balanced for me would mean that it has tons of bottom to go along with a cutting mid range. Is that the JB? No. It has the right balance to play a more mellow rock than today's bottom heavy modern rock sound and even heavy metal. I mean Jeff Beck wasn't exactly playing Master of Puppets now was he? THis was probably put out there as an alternative the the Single Coil pick ups that dominated the blues world back then. FOr the time, this was a pretty agressive tone and definately seperated Beck from the likes of Clapton. This is for playing classig rock to 80's hair for sure. Even the TOne Zone gives a heavier rendition and more bottom than the JB. All that being said, I like it for what it is and what it does. You can get these just about anywhere for a steal. The price is definately right and it does what it is supposed to do. I compared this to a lot of other pick up options and it just comes down to preference really. In the stock category I personally like the Tone Zone and the Gibson Dirty Fingers but the JB would be a close third. In the Boutique arena I would suggest a Motorcity Detroiter or Afwayu for heavy stuff. Good pick up for reasonable money is the bottom line.
Did you find this review helpful?yesno
Cookies help us improve performance, enhance user experience and deliver our services. By using our services, you agree to our use of cookies. Find out more.