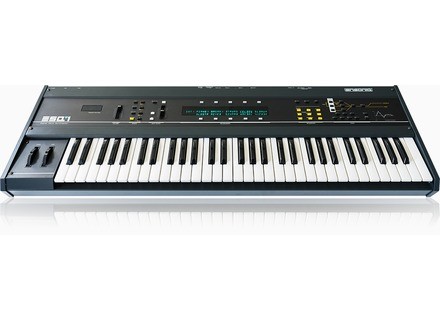 Ensoniq ESQ1
2
Nothing extraordinary under the hood

programming is basic ;, to be easy on the east, even simplistic

We quickly found at the end of the end; crcelle of sounds, there's nothing to draw

Whatever the price you pay not for money; put on the shelf in a closet; dcevant at best.

Ensoniq ESQ1
5
Obviously, the ESQ1 falls into the category of "big" synthesizers. Besides being one of the few hybrids - three digital oscillators and analogue filter EMC 3379 - it has four envelope generators and three LFOs, with modulation capabilities very impressive, similar to those offered by a modular or a 6 or 12 Oberheim Matrix. For example, envelope generators can modulate the pitch of the oscillators.
Oscillators, amplifieurs, filters and envelope generators are widely equipped in many and varied settings, including touching the keyboard velocity, among others.

The classic waveforms are complemented here by a few samples from the Mirage. Traditional waveforms are powerful, interesting for some samples. There are on the net EPROM "hidden wave", but their interest is very limited, because the waves are random and hidden little exploitable. In addition, these EPROM tend to make the synth unstable.

Other important features include layer two tones that can, or split the keyboard. In this case, the polyphony of eight votes initially divided by two, and sometimes it is just. on the other hand, there is no unison mode, and it is a shame for a synth hybrid course, but very typical analog.

A word on the keyboard: It is velocity sensitive, but the bill is Italian. This is the same as that used on the SIEL DK 80, Crumar Bit-99, etc ... There is no premium to the touch, but we made it. We would have preferred a DX7 type keyboard, better balanced in terms of touch.

Finally, end the description by the sequencer, easy to use, and generous enough for the time, with the expansion pack. Again polyphony of departure may limit certain ardor, if you want to superimpose sequences.

The interface is designed by Ensoniq quite sensible. We would have preferred a "whole knob" as a Memory Moog, but not dark ESQ1 not in the interface "calculator", common in the 80s, as encountered on Korg the time. Here you can enjoy a wide screen, aesthetics very typical 80, and especially legible. The buttons are directly related to the functions displayed. In addition, a front organization of the synthesizer makes its use very clear. In a few minutes, use is very intuitive, and even enjoyable.
However, the manual is useful to know some subtleties, and well take over all functions.

After the technical basics: sound. In this chapter, ESQ1 really plays in the big leagues. It is very warm, very powerful thanks to its three oscillators, an unusual feature that is equal to a Minimoog or MemoryMoog. If Moog are not accessible, Ensoniq, it can still be acquired for a reasonable amount, and can produce sounds resembling so closely. More generally, it is very typical electro broad sense of the term, the hard tech psyche, through pop and dub. Piano tones proposed approach also allow other genre like jazz, but it is not expressed well in this register. It is primarily a synth creation, research, and as such, it offers many possibilities.
ESQ1 The U.S. is definitely a synth, it has THE sound which kills very characteristic of the west coast. But unlike many, such as a Prophet, he is also able to show a different facet, and that he joined the personality of a DX7, extremely inventive and versatile. For example, as the DX7, it may become dark, surprising, or otherwise foil.
If allusions to famous Yamaha DX7 recur when we think the ESQ1 must still remember a radically different, and as such, it is not necessarily useful to oppose. On the contrary, they complement well enough, and ESQ1 can make the connection between the Yamaha and the classic analog.

To conclude comparison, do not forget to mention this common point between the ESQ1 and Korg DW 6000 and 8000: three synthesizers share a hybrid architecture, and are contemporary, within a few months. However, without depreciating the Korg, their characters are not comparable to those of ESQ1. Less ambitious in terms of programming, they differ fundamentally a temperament softer, more delicate, even. So if you hesitate between ESQ1 and DW 8000, well ... you need both, because one does not replace the other! Just like a DX7 does not replace a ESQ1 and vis-versa.

After a few months of use I began to build and "customize" my ESQ1, equipped with EPROM 3.50. So he meets a DX7 II, and DW 6000, but other synths as a Poly 800 II, Prophet 600, Pro One, a Poly Siel DK 61 and 80. In twenty years I had in hand the number of synthesizers. This experience allows me to present today Ensoniq ESQ1 an excellent choice because it offers a lot for a price measured, and undeniably, the sound is at the height of the greatest legends of the synthesis. It goes without saying that he has his faults like all instruments, but basically he has a big heart, the power is at the rendezvous, and musicality is a delight.

42 of 45 people found this review helpful

Ensoniq ESQ1
3
The ESQ1 is among the first workstation-type synth.
Polyphony 8 voices and sequencer 24,000 notes.
It uses a digital wavetable 8 analog waves and waves samplés.L 8 'envelloppe and filters are analog.
Sounds are excellent malgrés age.
Malheureusemennt mine died after 17 years of loyal service. I hope the resurrected ....
You can see the structure of the sounds on my sites.
www.armuco.ch (http://www.armuco.ch)

Very good opportunity to ring the analog modulation and sync

More highly topical because of the lack of votes. 8 Voice is too small today. But interesting if used with other synths.

106-juno's review (This content has been automatically translated from French)

Ensoniq ESQ1
5
Great synth sounds for old numrique found in today!
Part 8 and 8 voice poly, c but not a problem!

Stewardship noon edition single sounds "not like the DX7."
I found on the net an editor and reader unfamiliar sounds gnial!

Sound, pure electronic c! and stylish!
Tablecloths and good bass and lead and all but electro, c what I like!
Yammer It sounds that reminds me of the Commodore 64!!

5 years and no problem report!
Always so effective at all!
I do the same tuning

Did you find this review helpful?yesno
»
Read the 7 user reviews on the Ensoniq ESQ1 »

View all 2 videos of Ensoniq ESQ1 »