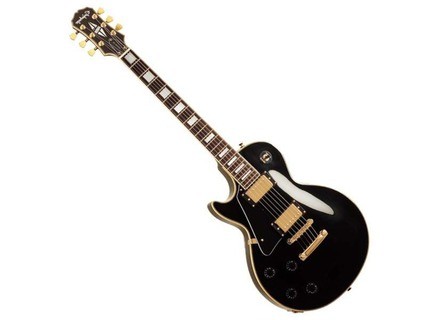 Epiphone Les Paul Custom LH
5
Got this one on ebay for about $510 (costs 630 new at musiciansfriend.com), by the way (for all u bayaholoics, musiccityusa is a great seller). I'd wanted a les paul since I was fifteen, and this is my third electric guitar, I previously had a left handed squire strat and a left handed peavey limited series exp.

1st of all, IT'S A LES PAUL!!!!!! ok, with that being said: great sustain, great pickups, great action, great tuners (grovers) nice neck (not impossibly thick but still something substantial), great finish (black with gold hardware), nice to have independent volume and tone controls for each pickup.

I'd say something if I had anything to say here.

Solidly built, Korean-made, (factory 2nd and still rock solid), As solid as any American Gibsons (or even more solid, from what I've been hearing about Gibson's quality control lately).

If you want a great les paul, DON'T WASTE UR MONEY ON A GIBSON. Get an epiphone.

Epiphone Les Paul Custom LH
4
Epiphone makes more lefties than most companies. All of their most popular models are available in lefty which is nice but you can not get them in as many colors. The Epiphone Les Paul custom is the budget version of the Gibson Les Paul custom. It pretty much has all the same features as a real Les Paul Custom apart from the ebony fretboard. The Custom is bascially a dressed up Les Paul standard. It has more binding on the body neck and headstock and has larger block inlays. I think the large block inlays give the guitar a classy look. The guitar has s 22 fret rosewood fretboard with the large block inlays. The headstock is fully bound. The body is solid mahogany. Customs do not have the maple top on the body. The color is solid black with gold hardware to give it class. It has dual humbucking Epiphone pickups in the standard Les Paul configuration. There is a volume knob and tone knob for each pickup and a 3 way switch to switch among them. The bridge is your standard tune o matic and stop tail like you would find on most every Les Paul.

This guitar is your basic Les Paul, it is just left handed. The neck is a bit bigger than on most modern guitars but it is not super big. In the 50s the necks on Gibson guitars were huge. They were commonly referred to as baseball bat necks. In the 60s Gibson switched to a slimmer profile. This slimmer 60s profile is the most popular neck profile on Gibsons and it is found on most Gibsons and Epiphones today. The upper fret access on this guitar is typical for every Les Paul. Since the body joins the neck at the 17th fret you will have to reach around the body of the guitar to get to frets higher than this. This strong joint helps with tone and sustain but limits upper fret playability greatly. The neck binding on this guitar and generally helps to limit the amount of sharp fret ends you feel when playing. The fretwork on these high end Epiphones is better than what you would get on a low end Gibson.

Like with most other mid to low end guitars the pickups let it down. All the wood is there you just need some good electronics to bring the tone out. The pickups could be better. They are pretty muddy and dead. You do not get much attack with these pickups. Since these pickups do not have much definition the neck position can get really muddy. With a high gain amp the sound might get muddy due to the lack of definition. With some types of music these pickups are great. If you want a bluesy sound these pickups will do really good and you will be able to get a smooth tone out of them. With a pickup swap this guitar can sound great so I would recommend to anyone who has one of these Epiphones to try it out with some after market pickups. A set of Seymour Duncans would beef up the tone a lot.

A Gibson Les Paul Custom is an expensive guitar to start with. A lefty one just makes the price rediculous. This is a good alternative to paying thousands and thousands of dollars for a lefty Les Paul Custom. I find the quality on high end Epiphones to be better than the quality on some lower end Gibsons. But be aware of the other Les Paul copies out there. There are a few smaller companies making much better quality guitars for the price of these Epiphones. A company like Agile will give you an ebony fretboard and Seymour Duncan pickups for the price of this Epiphone. If you are looking for an official copy that is of decent quality check out Epiphone.
Did you find this review helpful?yesno
»