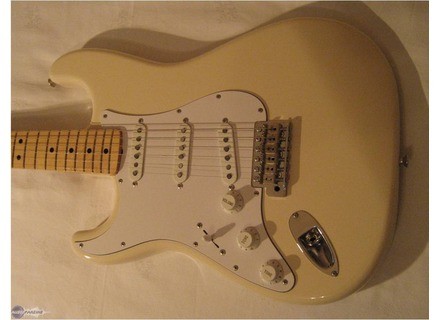 The finish is perfect with a superb varnish and not a single flaw.

Typical Strat ergonomics. This guitar has a perfect

shape and that's why there are lots of copies.

Ever since I mounted the Fender 69 set, I get the same sound as Hendrix, Gilmour and other guitarists of that time WITH THE SUPERB tone of the center positions.

Very versatile sound: this guitar is made to play everything.

I have a Fender Blues Junior tube amp which is necessary to get the true Fender Strat sound.

From jazz to pop, blues and rock, everything is possible except for heavy metal but I don't play that.

I've owned this guitar for one year and I can't seem to get bored. It's become indispensable.

I own 14 guitars and this is the easiest and most versatile one.

I didn't pay a lot for it but I changed the pickups and all the electronics.

I'm not sure if the wood is as good as that of a US-made model.

I would buy it again but I think it's very difficult to find one.
Did you find this review helpful?yesno
»

chris31vdl's review (This content has been automatically translated from French)" My favorite!"

Fender ST68-xx LH
It was made in Japan (Made in Japan and serial number at the bottom of the handle), this is a classic 68, so 21 frets, but with selector 5p. for the rest of the classic Strat.
It is mounted with standard Fender pickups, same for the bridge.
I'm left-handed guitars and choices are harder (and more expensive) than righties. I tried other models at the time but this is the one I chose. All white (olympic white), all maple neck, trust rod fortification. Feature: curiously, on the left model, there is only a Fender logo on the headstock, while the right-handed model there is the traditional logo Fender Stratocaster. But regardless, it is really great.

The handle is really great. Profile C, all maple, Japanese lacquer is exceptional, extremely gentle and from the first grip, we know we will not let go. For access to the latest cases, no problem, it's a strat. Personally, I like better the sound of the stratovolcano of 21 cases on 22.
The sound is richer, moelleux.Le real test, it is empty, without an amp, and there! you feel the resonance of the wood, the vibration of the handle! no comparison with 22 boxes. it is a versatile guitar generous and very comfortable.
The vibrato is a standard Fender but it is great tuning, even when triturated to Hendrix.
Japanese make quality first. Everything is original, I have not changed anything.

Musically I'm very open, but my musical roots are in the 70's, so I play a lot of blues and vintage rock of the time and this guitar is perfect: Deep Purple, Rory Gallagher, Jimi Hendrix, the Southern Rock. More recently, Stevie Ray Vaughan, Popa Chubby and many others.
I have a Vox VT15 amp modeling in 2007 and at home, it is perfect, no need to add anything. I use it a lot for music creation with Native Instruments Guitar Rig4 and the sound is always impeccable.

I use since 2007. I'm a little collector, I do not like to separate the guitars that I have acquired. So I already had some very different styles but equally additives, I acquired other since, but that's another story ...
To return to the subject, the Japanese guitars are excellent, purists swear by U.S. models but this guitar is not a copy! and much less expensive than a stratovolcano U.S., I have a gem in their hands.
The only downside is the stem of vibrato that took the game over time, but it is a recurring problem on the stratosphere. I tried to stuff the block but not éfficace. If someone has a simple trick that works without changing everything, I'm interested.

a beautiful vintage white finish for me

vintage vibrato, but that does not disturb too much for the agreement (if one is reasonable in a game)

The only problem is a problem of buzz that appears when I stop to touch the metal parts of the instrument.

This handle is the best I've played!!
Everything goes very fast without losing accuracy or sustain.
It is not too heavy and access is more acute than adequate.

Easily obtained a good sound stratum, but I think with a trio of vintage microphones 57/62 could do better.

For sound, is this little problem of buzz, but that needs to be repaired easily.

I play on an old Italian 73 amp and it sounds!

I play almost everything but metal all passes, with perhaps a slight preference for hendrix ... Anyway, this guitar is supposed to remember his own, so ...

Being left handed I did not have the opportunity to try many models, but for the price, it has absolutely nothing to fear from a U.S. standard and is well above a highway.

The violin is perfect, only the microphones may be a little below, but it sounds the same, and it is better from a good violin and add good microphones later than the other way around (it seems to difficult ...)

The only problem with this guitar seems to be that if we try, we go into debt to buy it (which was my case), and if we play, we can not stop (which creates some conflict with my studies ...).
Did you find this review helpful?yesno
»

The neck is incredible, this is my second guitar and I'm blown, it is light, the neck is super nice, with the acute accessibité is impeccable.
Sound, j'adooooooore.

I play with a small Fender amp and Boss pedals 5 and frankly it will suit all.
on the other hand, it does not forgive mistakes easily without effect

She is comfortable with all types of music (from mano negra to Faith No More through Pink Floyd and cake).

6 months.
What I like most: all
Ceques like least: nothing
For a guitar of this type and the pleasure it brings, is a very good investment.
I highly recommend it.
Did you find this review helpful?yesno
»
Read the 6 user reviews on the Fender ST68-xx LH »